Why I’m Writing a Book on Cryptography

I’ve now been writing a book on applied cryptography for a year and a half. I’m nearing the end of my journey, as I have one last ambitious chapter left to write: next-generation cryptography (a chapter that I’ll use to talk about cryptography that will become more and more practical: post-quantum cryptography, homomorphic encryption, multi-party computation, and zk-SNARKs).

I’ve been asked multiple times why write a new book about cryptography? and why should I read your book?. To answer this, you have to understand when it all started…

Today if you want to learn about almost anything, you just google it. Yet, for cryptography, and depending on what you’re looking for, resources can be quite lacking.

It all started a long time ago. For a class, I had to implement a differential power analysis attack, a breakthrough in cryptanalysis as it was the first side-channel attack to be published. A differential power analysis uses the power consumption of a device during an encryption to leak its private key. At the time, I realized that great papers could convey great ideas with very little emphasis on understanding. I remember banging my head against the wall trying to figure out what the author of the white paper was trying to say. Worse, I couldn’t find a good resource that explained the paper. So I banged my head a bit more, and finally I got it. And then I thought I would help others. So I drew some diagrams, animated them, and recorded myself going over them. That was my first screencast.

This first step in education was enough to make me want to do more. I started making more of these videos, and started writing more articles about cryptography on this blog (today totaling more than 500 articles). 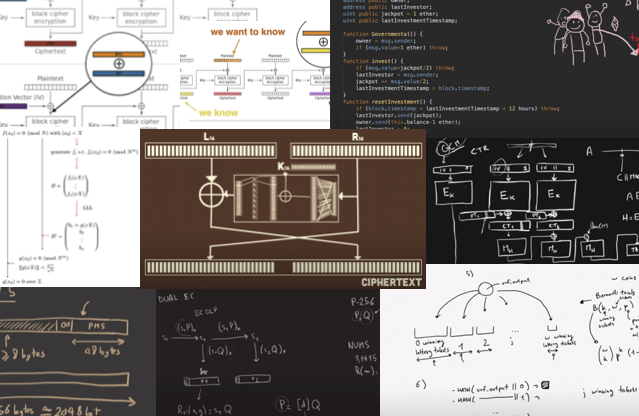 I realized early that diagrams were extremely helpful to understand complicated concepts, and that strangely most resources in the field shied away from them.

For example, anyone in cryptography who thinks about AES-CBC would immediately think about the following wikipedia diagram:

So here I was, trying to explain everything I learned, and thinking hard about what sorts of simple diagrams could easily convey these complex ideas. That’s when I started thinking about a book, years and years before Manning Publications would reach out to me with a book deal.

I hadn’t started cryptography due to a long-life passion. I had finished a bachelor in theoretical mathematics and didn’t know what was next for me. I had also been programming my whole life, and I wanted to reconcile the two. Naturally, I got curious about cryptography, which seemed to have the best of both world, and started reading the different books at my disposal. I quickly discovered my life’s calling.

Some things were annoying me though. In particular, the long introductions that would start with history. I was only interested in the technicalities, and always had been. I swore to myself, if I ever wrote a book about cryptography, I would not write a single line on Vigenère ciphers, Caesar ciphers, and others.

And so after applying to the masters of Cryptography at the university of Bordeaux, and obtaining a degree in the subject, I thought I was ready for the world. Little did I know. What I thought was a very applied degree actually lacked a lot on the real world protocols I was about to attack. I had spent a lot of time learning about the mathematics of elliptic curves, but nothing about how they were used in cryptographic algorithms. I had learned about LFSRs, and ElGamal, and DES, and a series of other cryptographic primitives that I would never see again.

When I started working in the industry at Matasano (which then became NCC Group), my first gig was to audit OpenSSL. Oh boy, did it hurt my brain. I remember coming back home every day with a strong headache. What a clusterfuck of a library. I had no idea at the time that I would years later become a co-author of TLS 1.3.

But at that point I was already thinking: this is what I should have learned in school. The knowledge I’m getting now is what would have been useful to prepare me for the real world. After all, I was now a security practitioner specialized in cryptography. I was reviewing real-world cryptographic applications. I was doing the job that one would wish they had after finishing a cryptography degree. I implemented, verified, used, and advised on what cryptographic algorithms to use.

This is the reason I’m the first reader of the book I’m writing. This is what I would have wrote to my past self in order to prepare me for the real world.

The use of cryptography is where most of the bugs are

My consulting job led me to audit many real world cryptographic applications like the OpenSSL, the encrypted backup system of Google, the TLS 1.3 implementation of Cloudflare, the certificate authority protocol of Let’s Encrypt, the sapling protocol of Zcash, the threshold proxy re-encryption scheme of NuCypher and dozens and dozens of other real-world cryptographic applications that I unfortunately cannot mention publicly.

Early in my job, I was tasked to audit the custom secure transport protocol from a big corporation that I can’t name. It turns out that, they were signing everything but the ephemeral keys, which completely broke the whole protocol (as one could have easily replaced the ephemeral keys). A rookie mistake from anyone with some experience with secure transport protocols, but something that was missed by people who thought they were experimented enough to roll their own crypto. I remember explaining the vulnerability at the end of the engagement, and a room full of engineers turning silent for a good 30 seconds.

This story repeated itself many times during my career. There was this time where while auditing a cryptocurrency for another client, I found a way to forge transactions from already existing ones (due to some ambiguity of what was being signed). Looking at TLS implementations for another client, I found some subtle ways to break an RSA implementation, which in turned transformed into a white paper (with one of the inventor of RSA) leading to a dozens of CVEs. More recently, reading about Matrix as part of writing my book, I realized that their authentication protocol was completely broken, leading to a complete break of their end-to-end encryption. 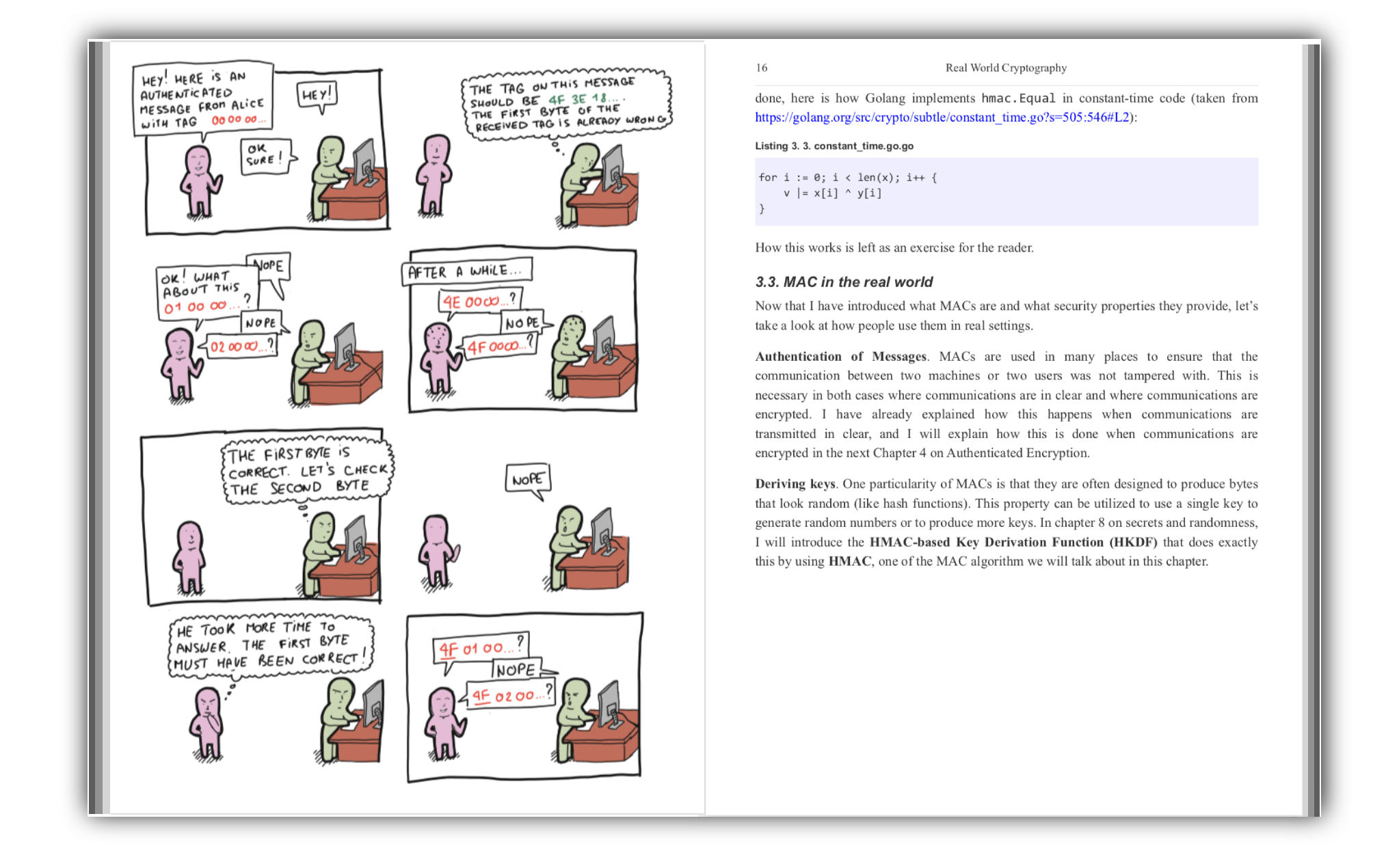 There’s so many details that can unfortunately collapse under you, when making use of cryptography. At that point, I knew I had to write something about it. This is why my book contains many of these anecdotes.

As part of the job, I would review cryptography libraries and applications in a multitude of programming languages. I discovered bugs (for example CVE-2016-3959 in Golang’s standard library), I researched ways that libraries could fool you into misusing them (for example see my paper How to Backdoor Diffie-Hellman), and I advised on what libraries to use. Developers never knew what library to use, and I always found the answer to be tricky.

I went on to invent the disco protocol, and wrote a fully-featured cryptographic library in less than 1,000 lines of code in several languages. Disco only relied on two cryptographic primitives: the permutation of SHA-3 and curve25519. Yes, from only these two things in 1,000 lines of code a developer could do any type of authenticated key exchange, signatures, encryption, MACs, hashing, key derivation, etc. This gave me a unique perspective as to what a good cryptographic library was supposed to be.

I wanted my book to contain these kind of practical insights. So naturally, the different chapters contain examples on how to do crypto in different programming languages, using well-respected cryptographic libraries.

A need for a new book?

As I was giving one of my annual cryptography training at Black Hat, one student came to me and asked if I could recommend a good book or online course on cryptography. I remember advising the student to read the book from Boneh & Shoup and Cryptography I from Boneh on Coursera.

The student told me “Ah, I tried, it’s too theoretical!”. This answer stayed with me. I disagreed at first, but slowly realized that they were right. Most of these resources were pretty heavy in math, and most developers interacting with cryptography don’t want to deal with math.  What else was there for them? The other two somewhat respected resources at the time were Applied Cryptography and Cryptography Engineering (both from Schneier). But these books were starting to be quite outdated. Applied Cryptography spent 4 chapters on block ciphers, with a whole chapter on cipher modes of operation but none on authenticated encryption. Cryptography Engineering had a single mention of elliptic curve cryptography (in a footnote).

On the other hand, many of my videos or blog posts were becoming good primary references for some cryptographic concepts.

I knew I could do something special.

Gradually, many of my students started becoming interested in cryptocurrencies, asking more and more questions on the subject. At the same time, I started to audit more and more cryptocurrency applications. I finally moved to a job at Facebook to work on Libra. Cryptocurrency was now one of the hottest field to work on, mixing a multitude of extremely interesting cryptographic primitives that so far had seen no real-world use case (zero knowledge proofs, aggregated signatures, threshold cryptography, multi-party computations, consensus protocols, cryptographic accumulators, verifiable random functions, verifiable delay functions, … the list goes on)

I was now in a unique position.

I knew I could write something that would tell students, developers, consultants, security engineers, and others, what modern applied cryptography was all about. 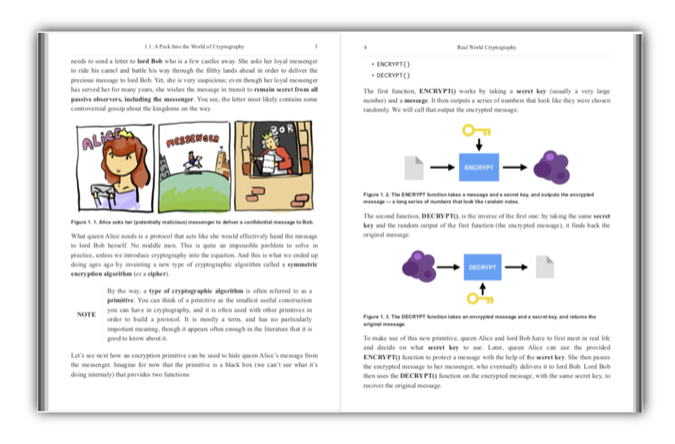 This was going to be a book with very little formulas, but filled with many diagrams.

This was going to be a book with little history, but filled with modern stories about cryptographic failures that I had witnessed for real.

This was going to be a book with little about legacy algorithms, but filled with cryptography that I’ve personally seen being used at scale: TLS, the Noise protocol framework, Wireguard, the Signal protocol, cryptocurrencies, HSMs, threshold cryptography, and so on.

This was going to be a book with little theoretical cryptography, but filled with what could become relevant: password-authentication key exchanges, zero-knowledge proofs, post-quantum cryptography, and so on.

Coincidentally, they had a series of “real-world” book, and so naturally I suggested that my book extend it.

Real-World Cryptography is available for free in early-access.

I want this to be the best book on applied cryptography. For this reason, if you have any feedback to give, please send it my way 🙂

The book should be ready in print for the end of the year.