Lightweight static analysis for many languages.
Find and block bug variants with rules that look like source code.

Semgrep is a command-line tool for offline static analysis. Use pre-built or custom rules to enforce code and security standards in your codebase. You can try it now with our interactive live editor.

Semgrep combines the convenient and iterative style of grep with the powerful features of an Abstract Syntax Tree (AST) matcher and limited dataflow. Easily find function calls, class or method definitions, and more without having to understand ASTs or wrestle with regexes.

Visit Installation and Usage to get started.

Want to skip installation? You can run Semgrep via our interactive live editor at semgrep.live.

On macOS, binaries are available via Homebrew:

On Ubuntu/WSL/linux, we recommend installing via pip

An install script is also available with each release if you want a native binary.

To try Semgrep without installation, you can also run it via Docker:

See Usage to learn about running pre-built rules and writing custom ones.

The AppSec, Developer, and DevOps communities deserve a static analysis tool that is fast, easy to use, code-aware, multi-lingual, and open source!

Missing support for a language? Let us know by filing a ticket, joining our Slack, or emailing support@r2c.dev.

One of the most unique and useful things about Semgrep is how easy it is to write and iterate on queries.

The goal is to make it as easy as possible to go from an idea in your head to finding the code patterns you intend to.

Example: Say you want to find all calls to a function named exec, and you don’t care about the arguments. With Semgrep, you could simply supply the pattern exec(...) and you’d match:

Importantly, Semgrep would not match the following:

Semgrep will even match aliased imports:

Play with this example in your browser here, or copy the above code into a file locally (exec.py) and run:

For more info on what you can do in patterns, see the pattern features docs.

The following sections cover each in more detail.

The easiest way to get started with Semgrep (other than semgrep.live) is to scan your code with pre-built rules.

The Semgrep Registry contains rules for many programming errors, including security issues and correctness bugs. Security rules are annotated with CWE and OWASP metadata when applicable. OWASP rule coverage per language is displayed below. 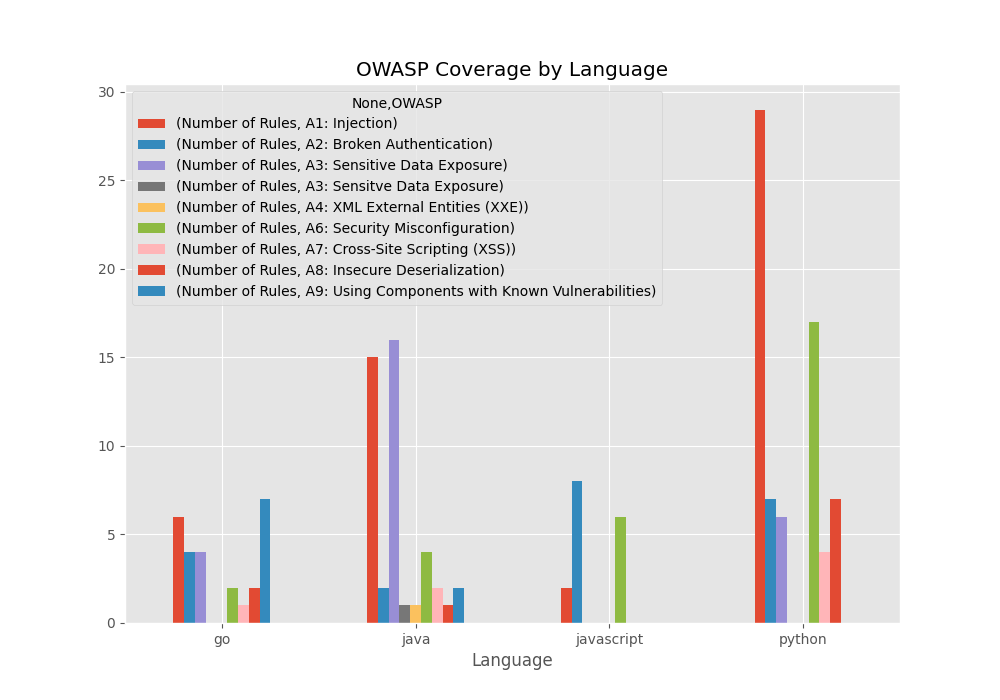 You can use pre-built Rule Packs, that contain sets of rules grouped by language and/or framework:

Or you can run all of Semgrep’s default rules for all languages as appropriate (note: each rule says what language it’s for, so Semgrep won’t try to run a Python rule on Java code).

You can also run a specific rule or group of rules:

All public Semgrep rules can be viewed on the Registry, which pulls the rules from YAML files defined in the semgrep-rules GitHub repo.

Here are some sample vulnerable repos to test on:

One of the strengths of Semgrep is how easy it is to write rules.

This makes it possible to:

For iterating on simple patterns, you can use the --lang and --pattern flags.

The --lang flag tells Semgrep which language you’re targeting and --pattern is the code pattern to search for.

Some rules need more than one line of pattern to express. Sometimes you want to express code patterns, like: X must be true AND Y must be too, or X but NOT Y, or X must occur inside a block of code that Y matches.

For these cases, Semgrep has a more powerful and flexible YAML syntax.

You can run a single rule or directory of rules specified in YAML by:

Say you are building a financial trading application in which every Transaction object must first be passed to verify_transaction() before being passed to make_transaction(), or it’s a business logic bug.

You can express this behavior with the following Semgrep YAML pattern:

You can play with this transaction example here: https://semgrep.live/4b4g.

Semgrep can be run via CLI or Docker and output results as JSON (via the --json flag), so it can be inserted into any CI pipeline and have its results processed by whatever tools you’re using.

Semgrep is aware of diffs, so it can report only findings that occur in newly added code, for example, in a commit or pull request.

Currently, the easiest way to integrate Semgrep into CI is via a GitHub action we’ve built. See the integrations docs for more details.

Semgrep can also output results in the standardized Static Analysis Results Interchange Format (SARIF) with the --sarif flag, if you use tools that accept this format.

How you upgrade Semgrep will depend on how you installed it.

Semgrep is a frontend to a larger program analysis library named pfff. pfff began and was open-sourced at Facebook but is now archived. The primary maintainer now works at r2c. Semgrep was originally named sgrep and was renamed to avoid collisons with existing projects.

Interested in a fully-supported, hosted version of semgrep? Drop your email and we’ll ping you!

Pkg.go.dev is more concerned with Google's interests than good engineering

Why C# coders should shut up about Delphi