Happy Valentines Day from all of us at DoltHub! You are the reason we do what we do! 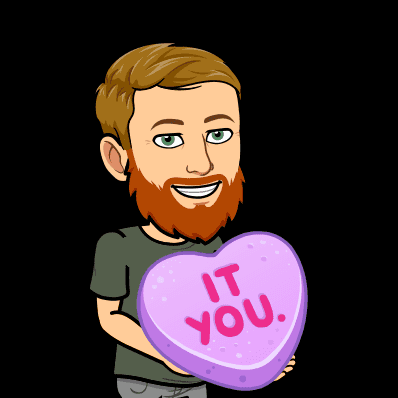 In honor of the holiday, we want to talk about how much we love making queries faster. We’re going to examine how our SQL engine makes a query plan and explain how we optimized it to make joins faster. We hope you love reading our story!

Dolt uses an open-source SQL engine called go-mysql-server. We chose it because it was the leading go-native SQL execution engine at the time we went looking for one. We wanted a go-native solution because Dolt is written in go, and we wanted to ensure Dolt users don’t have to do anything other than install the dolt binary to start using SQL out of the box. Since adopting it, we’ve forked it and have made many improvements. One of our latest was to implement logic for indexed joins, which makes join on primary key columns several orders of magnitude faster.

Before we dive into how we did this, we need to understand a little bit about how go-mysql-server works.

How go-mysql-server builds a query plan

Let’s assume we start with the following query:

go-mysql-server breaks the execution of a query down into three distinct phases.

The parse phase takes the SQL query string and transforms it into an abstract syntax tree (AST), a data structure that reflects the structure of the query. After parsing, we end up with an AST that looks like this: 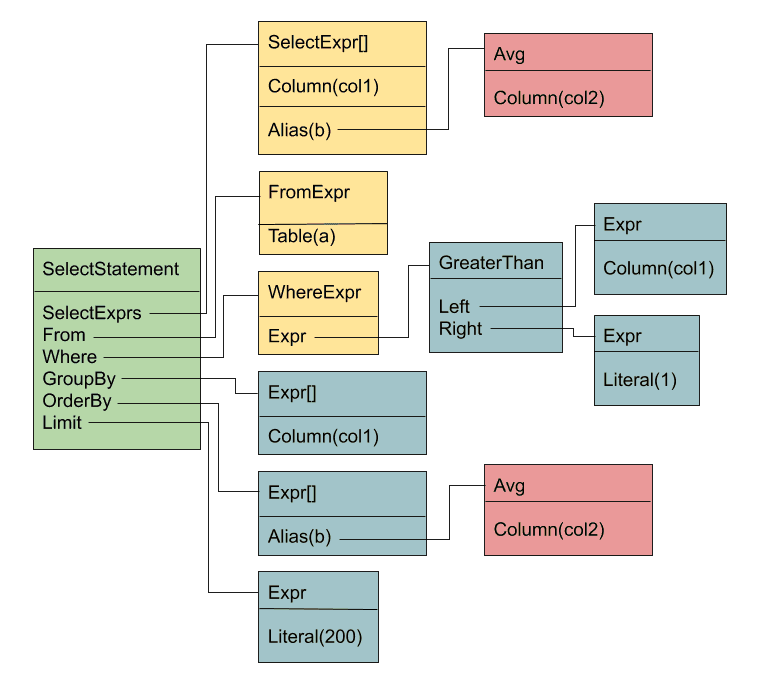 Next, the AST is walked to assemble a parallel structure of Nodes. Nodes are a go-mysql-server data structure that knows how to return rows for the part of the query plan it represents. This step’s job is just to faithfully represent the exact structure of the AST as a tree of Nodes. This gives us a Node representation of the tree that looks like this: 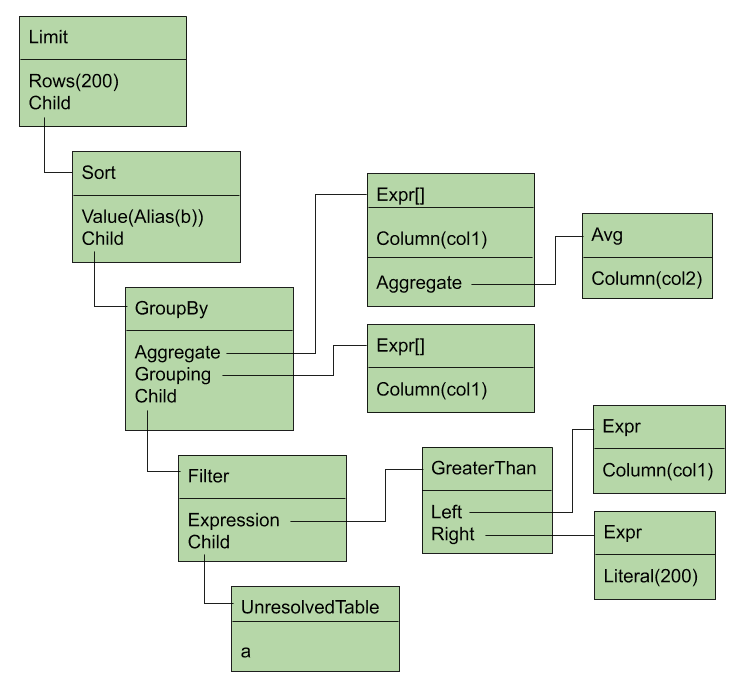 Finally, the tree of Nodes is transformed through a series of bottom-up transformation functions to give the final tree of Nodes, which represents the actual query plan. This analysis step is very involved and does everything from resolving table and column names to pushing where clauses down onto their source tables. This gives us the final representation of the tree, which looks like this: 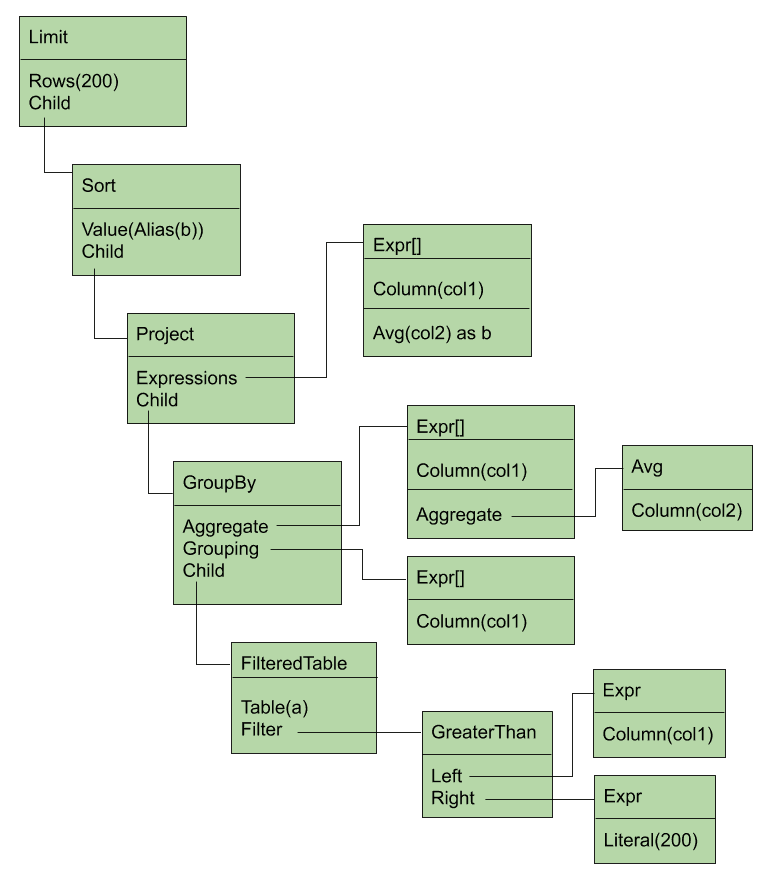 The analyzed tree looks a lot like the parsed tree, except that it added a projection (to select a subset of columns from the child node) and it pushed the filter operation down onto the table itself. This latter move doesn’t matter much for this query, but any time a join is involved, pushing a filter down onto its origin table can make execution much faster.

Now that we are familiar with how the SQL engine creates an execution plan, we’ll switch to a more compact, textual format for the rest of this post. This is the same format Dolt uses when you ask it to explain a query:

go-mysql-server has long supported indexes, and will use them to avoid a full table scan if they appear in a WHERE clause. But indexes weren’t being used in the exection of joins, and there weren’t plans to do so. This means that joins always had quadratic performance — a full table scan of the secondary table for every row in the primary table (with disk access on every scan for big tables). In practice, this meant that even moderately sized tables, on the order of tens of thousands of rows, couldn’t be joined together in a reasonable amount of time. This was a major barrier to Dolt’s utility as a SQL engine, so we decided we needed to fix it.

As you might have guessed, the implementation involved a new stage in the Analyzer, to replace InnerJoins with IndexedJoins where possible. The heart of this transformation looks like this:

There’s a lot going on here, so let’s examine it step by step.

First, plan.TransformUp is a function that walks the execution tree from the bottom up, running a function you specify for each Node. You return a new Node to replace the current one, as necessary. The switch statement that begins the fuction shows that we’re only interested in transforming certain classes of Nodes, namely those that implement joins.

Next, we analyze the two tables in the join to figure out which indexes we can apply (more on this in a moment), and also to determine which table to use as the primary, and which as the secondary. We must examine every row in the primary, and use it to look up rows in the secondary table using an index.

Finally, we replace the ResolvedTable node for the secondary table with an IndexedTable node to make accessing it simpler in the actual join code.

Conceptually, this is relatively straightforward. In practice, there were lots of wrinkles that it took a while to sort out, and many bugs we found and squashed. We were very grateful to have our test suite of 5.7 million SQL queries to give us confidence we weren’t introducing errors into the execution logic.

Choosing the right index for a join

For our first pass, we decided to focus on just equality conditions on all the columns in the primary key of a table. go-mysql-server already provides an interface for declaring indexes on a table, which we won’t go into. The interesting part is finding which of the declared indexes can be used in a join.

In getJoinIndexes, we examine the condition of a join node to see if we can use an index on either of the tables in the condition. We only support two kinds of expressions here: simple equality, and conjunctions (AND). In the case of the latter we try to match every part of the conjunction to produce a single index across multiple columns.

Once we know which indexes to use for the join, it’s just a matter of choosing a primary and secondary table. Note that we need to consider the join type (LEFT or RIGHT or INNER) here, because e.g. the left table in a LEFT join must always be considered the primary table. This function looks more complicated than it is: really it’s just asserting the LEFT and RIGHT join constraints we just mentioned, and swapping the left and right tables as necessary so that the secondary table is on the right.

Finding the row in the secondary table

Finally we come to the guts of the implementation, where we get to evaluate every row in the primary table and use the join condition to look up an index on the secondary table. The code is pretty straightforward:

So first, we evaluate the primary table’s expression against the primary table row to get all the elements of the index key. Once we have it, we call i.secondaryIndexAccess.SetIndexLookup(lookup) with the resulting index lookup, which informs the IndexedTable to start iterating with that key on the next call to Node.RowIter. Then when all the rows for that key are exhausted, secondary and primaryRow are both set to null, which makes the iterator move on to the next row in the primary table.

This optimization makes it feasible to run two-table joins in a reasonable amount of time, and it works for arbitrarily complex queries. For example, in our last blog post we demonstrated how complex a query execution plan can get when joining multiple views together on our COVID19 dataset. Note that the query planner uses IndexedJoins for all the view subqueries, which is what makes the query performant.

We think this is pretty cool. But there’s more work to do:

We’re excited to get to work on these improvements. If you think of more, file an issue or a PR and let us know!

What will this print?