We took part in the recently held GraphQL Summit in San Francisco.

The conference was exciting, and it had a great line up of talks. As expected, the enthusiasm in the GraphQL community was unmatchable.

We took part as one of the platinum sponsors of the event, and we also unveiled the new GraphQL API for Dgraph. Read along as we share our experience at the event as it unfolded.

Dgraph’s love affair with GraphQL is not new. Back in 2015, we chose it to be the query language for the database right at the outset.

But, the simplicity of GraphQL makes it infeasible to express all database operations with it. Rather than exposing a subset of functionalities through complete GraphQL spec compatibility, we chose to sway away a bit, and this led to GraphQL+-. Over the years, the GraphQL community constantly desired for the full spec compatibility. Developers wanted the power of Dgraph, but integrated into GraphQLs growing ecosystem, tooling, and workflows. We obliged!

Here is an article by our founder, Manish R Jain, if you are curious to learn all about our journey with GraphQL!

The way GraphQL kicked off in recent years has been incredible. We first witnessed the enchanting energy of the community when we participated at the GraphQL Conf early this year in Berlin.

It’s around the same time we decided to build the GraphQL API for Dgraph!

Dgraph at the GraphQL Summit

And now, Dgraph’s GraphQL API is here! We decided what better place to demonstrate it than the GraphQL Summit!

So there we were, as one of the platinum sponsors, thrilled to showcase our brand new GraphQL API to the broader community. 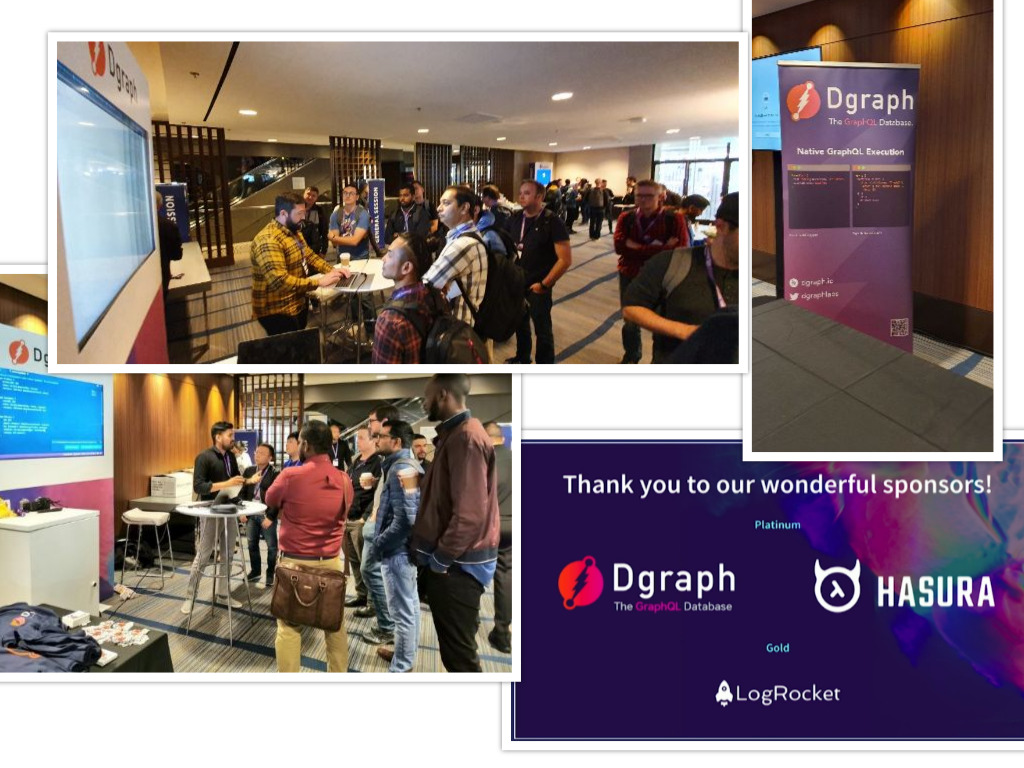 Dgraph and its new GraphQL API

For those who don’t know about Dgraph, here’s a short description.

Dgraph is an open-source, distributed, transactional Graph Database. Our mission is to enable, simplify, and empower developers to build scalable applications on the cloud. Applications that could continue to thrive even as the size, complexity, and relationships of your data continues to grow.

We wanted to enhance further the developer experience of building apps on top of the distributed Graph Database. Our goal was to enable app developers to be able to get started in minutes.

We did precisely that with our new GraphQL API.

And here’s how it works!

You need to represent your app data as GraphQL types in a text file, and submit it to Dgraph. Dgraph instantly gives you the CRUD GraphQL API’s which can read from and write into the database. All of it without having to write any backend code, or use a database ORM or even running your own GraphQL server.

If that sounds interesting, check out the docs for the GraphQL API at https://graphql.dgraph.io. Give it a try, and do let us know what you think!

And If you are curious to learn more about the Graph Database in general, check out our tutorial series on the same.

The conference was held in Hyatt Regency, Embarcadero, San Francisco. With participation from over 1,200 developers, this was the world’s largest conference dedicated to GraphQL. The conference featured over 60 technical talks across three tracks!

The stage was set. The speakers, participants, organizers, and sponsors were all geared up.

The Summit was all set for a magnificent show!

We took the opportunity to share the excitement with the rest of the world by live-tweeting about it. It’s still not too late to scroll through the tweet thread and get the highlights of the conference 🙂

Here’s the thread for Day 1 of the conference.

This is the live tweet thread for day 1 of GraphQL summit.
Feel free to mute the thread if you’re not interested🔇#GraphQL #GraphQLSummit @apollographql @graphqlsummit

Here’s the thread for Day 2 of the conference.

This is the live tweet thread for day 2 of GraphQL summit.
Feel free to mute the thread if you’re not interested🔇#GraphQL #GraphQLSummit @apollographql @graphqlsummit pic.twitter.com/pVVIB85IcK

Apollo’s Co-founder and CTO, Matt Debergalis, kicked off the GraphQL Summit with his Keynote address.

Obsessed with the mission of bringing GraphQL to every developer on the planet, he shed light upon some recent advancements at Apollo. He enlightened the audience on the importance and advantages of decoupling the apps from their services, using a graph gateway. 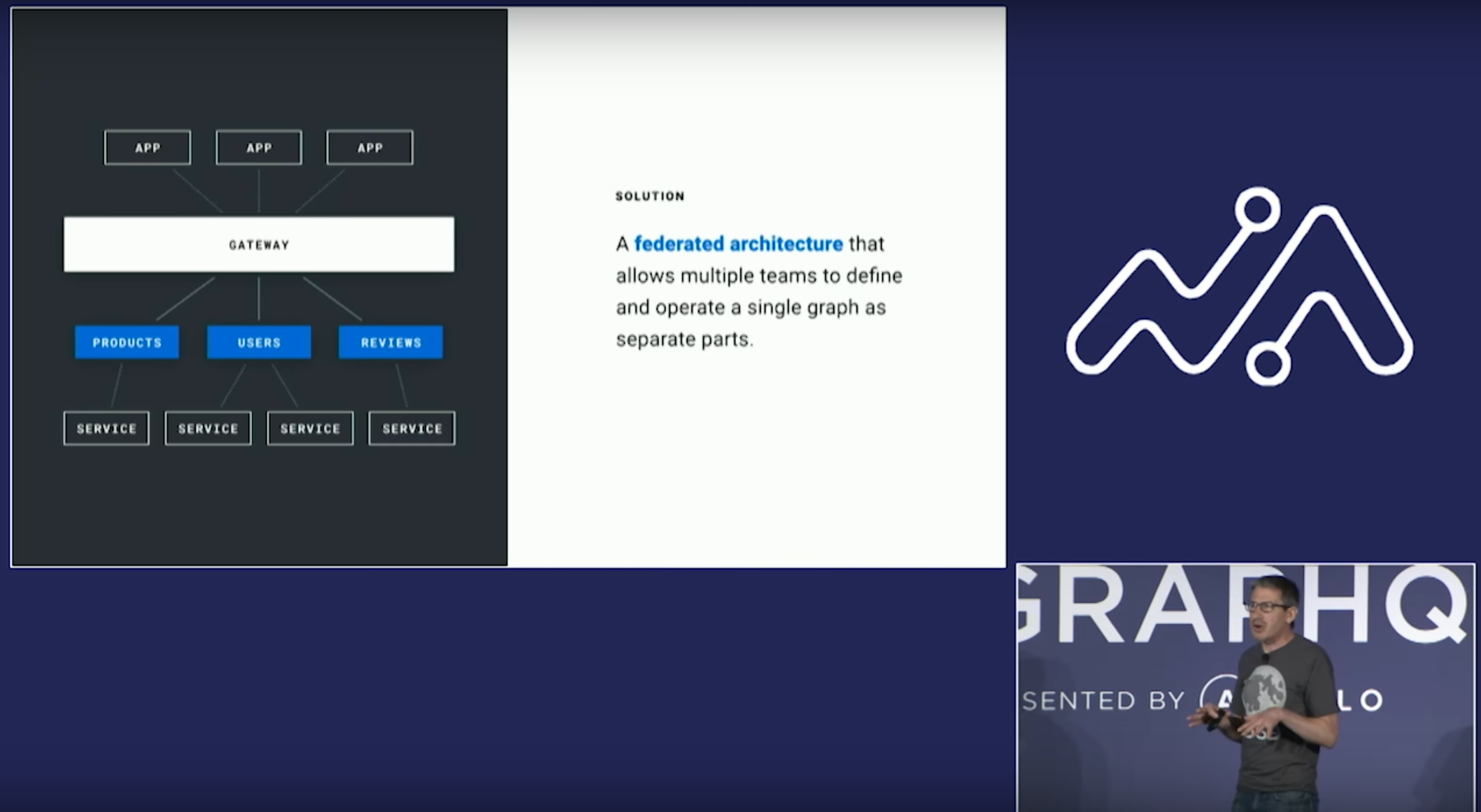 Then he explained how the Apollo federation could help you build this Graph gateway to all of your organization data.

GraphQL summit 2019 kicks off with the opening keynote from Matt Debergalis (@debergalis), Co-founder and CTO at @apollographql.#GraphQL #GraphQLSummit pic.twitter.com/R77DTlVKIu

If you take a closer look at the talks, we could broadly categorize them into the following sections.

The GraphQL adoption and success story

Here are some of the talks where the speakers shared the GraphQL adoption and success story at their organization.

Here’s Jim Gust, a Sr Technical Product Manager and
Dan Boerner (@dan_boerner), Distinguished Product Manager at Expedia.
It was wonderful as they took us through the journey of how GraphQL adoption transformed customer experiences at @expedia.#GraphQL #graphqlsummit #expedia pic.twitter.com/O9e2ic7UsL

Gopal Holla, Staff Software Engineer at Linkedin, took the audience through the GraphQL use case at Linkedin.

He shared how Linkedin is leveraging GraphQL to enable easier addition and access of entities in the Economic Graph. He presented LinkedIn’s vision for modeling entities, defining privacy rules. He also shared their plan around using GraphQL to enable a consistent access experience across online, nearline, and offline environments.

Catch Gopal Holla(@vgkholla), Staff Software Engineer at @LinkedIn, as he speaks about the GraphQL journey at his organization. #GraphQL #graphqlsummit #LinkedIn pic.twitter.com/yhDG81E3dy

James Lawrie, Lead Software Engineer at The New York Times (@nytimes) takes the audience through their journey of how they scaled GraphQL.#graphqlsummit #graphqlsummit #NYTimes pic.twitter.com/czBYjXG08K

Michelle Garrett, Software Engineer at Condé Nast International, spoke about scaling your GraphQL API beyond a single consumer. In her talk, she discussed how to transition a client-specific GraphQL layer into a universal graph for multiple consumers.

Fantastic insights and lots of learning! It was excellent watching Michelle Garrett (@msmichellegar), a Software Engineer at Condé Nast International (@CondeNastEng), with her talk titled Scaling GraphQL Beyond a Backend for Frontend.#graphqlsummit #graphql pic.twitter.com/7UYNaRejHW

Marc-André Giroux, a Senior Platform Engineer at GitHub, spoke about caching and GraphQL. In his talk, he debunked some myths and shed light on the best practices around caching & GraphQL.

Great to see a talk from Marc-André Giroux (@__xuorig__) from @github after @thegraphqlconf in Berlin!

His talk on Caching & GraphQL was very insightful!#graphqlsummit #GraphQL pic.twitter.com/HU0jIiVdl9

This talk by Alex Banks, Software Engineering Instructor at Moon Highway, was the most fun-filled talk of the conference. In his talk, he took a deep dive into subscription implementation and state management. He also touched upon solutions for scaling real-time GraphQL applications.

He covered the testing, monitoring, and performance tricks to build a client-side app with hundreds of GraphQL operations.

Oh hey! Great to see Shruti Kapoor (@shrutikapoor08) charming the audience again after @react_india.
This is the talk to be at if you’re eager to learn state management with React hooks and @apollographql Client. @PayPalEng @reactjs #ReactJS #GraphQL #graphqlsummit pic.twitter.com/WyZaaiUPeh

Kiran Kumar Abburi, The Founder at neostack.com and a co-organizer of React Bangalore meetups, taught the tips and tricks when building offline-first apps with GraphQL & Apollo.

Jon Wong, Staff Software Engineer at Coursera, took the audience through a journey into writing GraphQL apps in almost every language.

Daniel Woelfel, Founder at OneGraph, shared his thoughts on the future of GraphQL tooling.

Natalia Tepluhina, a Senior Frontend Engineer at GitLab, gave insights about how they moved from Vuex to Apollo state management at GitLab.

Nice talk by Natalia Tepluhina(@n_tepluhina), a Senior Frontend Engineer at @GitLab , and also a core team member at @vuejs.
It was interesting to listen to the journey of how Gitlab moved from Vuex to state management using Apollo.

Follow along as Tanmai shares his take on building a high-performance real-time GraphQL API on existing databases and data sources.

The GraphQL Summit ended on a high note.

In the last couple of years, developers, startups, and enterprises are adopting GraphQL at a staggering rate. The passion in the GraphQL community has been spectacular, and their excitement for the technology is phenomenal. Modern applications and their data requirements are becoming more complex than ever before, while the users’ expectations keep on getting higher. Meeting these expectations seamlessly across a variety of devices and platforms has made the app developer’s life harder.

GraphQL provides an elegant solution to solve the needs of a modern app. It encourages you to build the mental model of your application data as a Graph. The intuitiveness of the query language makes it simple to express the data requirements and operations of even the most complex application.

Hence, we at Dgraph, are excited about the GraphQL wave and it’s adoption!

And to add to that excitement, we were very thrilled by the responses and feedback we got community for our new GraphQL API!

Before we end, if you haven’t tried Dgraphs new GraphQL API yet, do give it a try, and we would love to hear back from you.

The #graphqlsummit has wrapped but you still are right on time to give @dgraphlabs‘s new #GraphQL API a try!

A full-fledged graph database that you already know how to use … and even integrates with @apollographql federation!https://t.co/rnjxOWogec

Introducing GraphQL Tweetletter: A weekly digest of the most interesting GraphQL tweets

Why Dgraph Is Shutting Down Slack