Welcome to the sixth episode of getting started with Dgraph.

In the previous episode, we learned about building social graphs in Dgraph, by modeling tweets as an example. We queried the tweets using the hash and exact indices, and implemented a keyword-based search to find your favorite tweets using the term index and its functions.

In this tutorial, we’ll continue from where we left off and learn about advanced text search features in Dgraph.

Before we dive in, let’s do a quick recap of how to model the tweets in Dgraph. 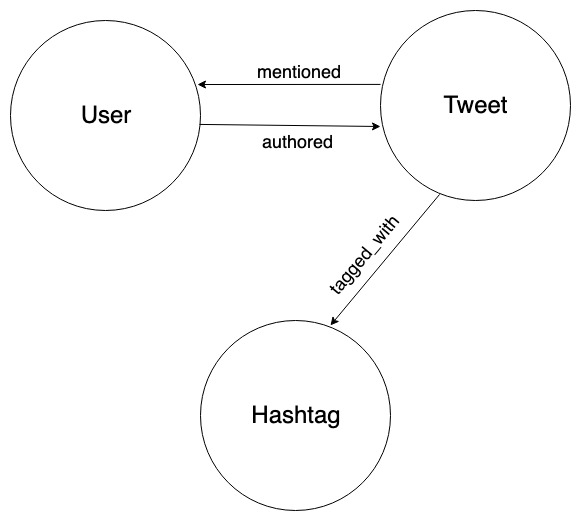 In the previous episode, we took three real tweets as a sample dataset and stored them in Dgraph using the above graph as a model.

In case you haven’t stored the tweets from the previous episode into Dgraph, here’s the sample dataset again.

Note: If you’re new to Dgraph, and this is the first time you’re running a mutation, we highly recommend reading the first episode of the series before proceeding.

Voilà! Now you have a graph with tweets, users, and hashtags. It is ready for us to explore. 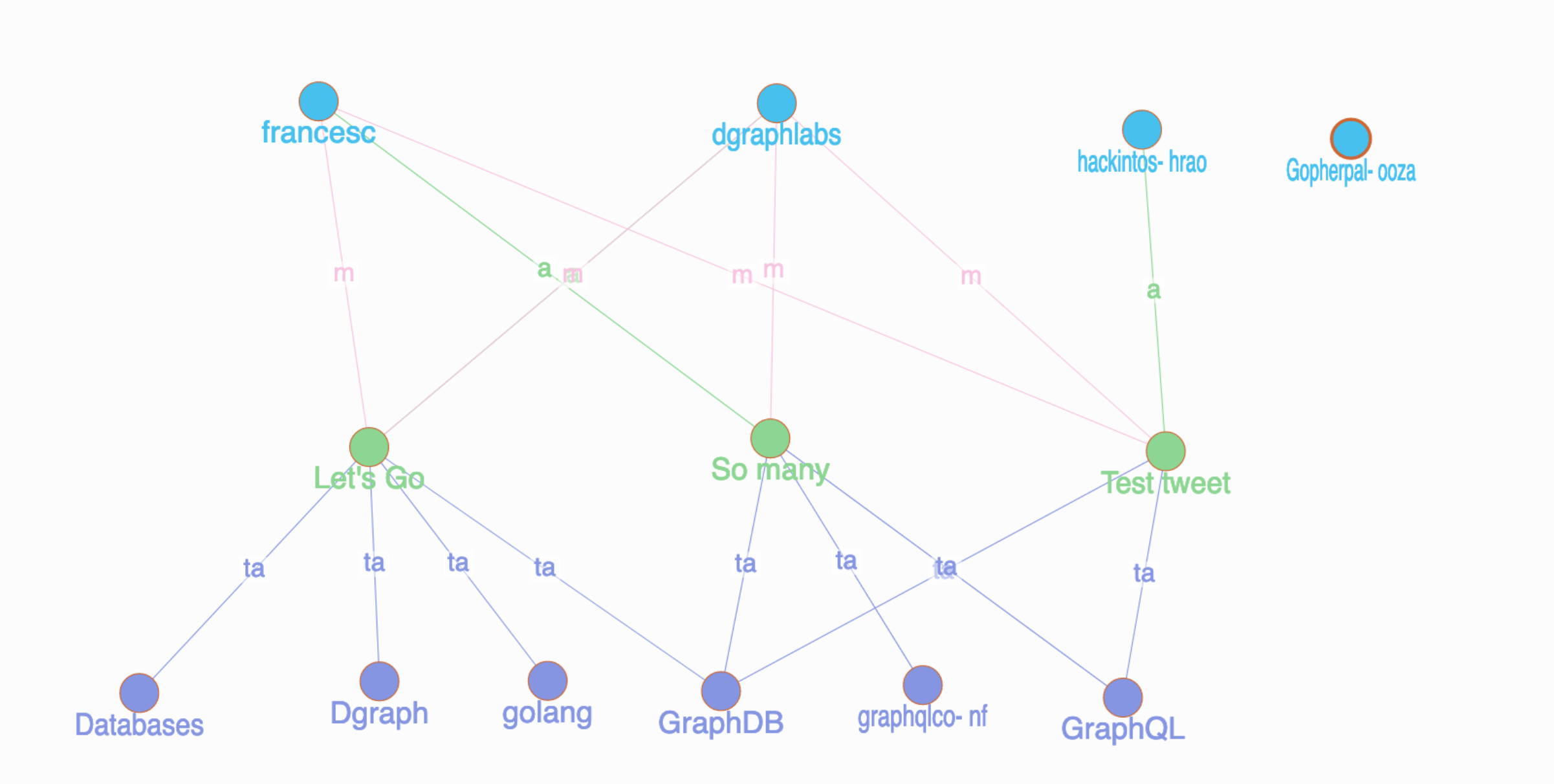 Note: If you’re curious to know how we modeled the tweets in Dgraph, refer to the previous episode.

Before we learn how to use the Full-text search feature, it’s important to understand when to use it.

The length and the number of words in a string predicate value vary based on what the predicates represent.

Some string predicate values have only a few terms (words) in them. Predicates representing names, hashtags, twitter handle, city names are a few good examples. These predicates are easy to query using their exact values.

For instance, here is an example query.

Give me all the tweets where the user name is equal to John Campbell.

You can easily compose queries like these after adding either the hash or an exact index to the string predicates.

But, some of the string predicates store sentences. Sometimes even one or more paragraphs of text data in them. Predicates representing a tweet, a bio, a blog post, a product description, or a movie review are just some examples. It’s relatively hard to query these predicates.

But, for some of the use cases, just the keyword-based search may not be sufficient. You might need a more powerful search capability, and that’s when you should consider using Full-text search.

To be able to do a Full-text search, you need to first set a fulltext index on the tweet predicate.

Creating a fulltext index on any string predicate is similar to creating any other string indices.

Note: Refer to the previous episode if you’re not sure about creating an index on a string predicate.

Now, let’s do a Full-text search query to find tweets related to the following topic: graph data and analyze it in graphdb.

You can do so by using either of alloftext or anyoftext in-built functions. Both functions take two arguments. The first argument is the predicate to search. The second argument is the space-separated string values to search for, and we call these as the search strings.

We’ll look at the difference between these two functions later. For now, let’s use the alloftext function.

Go to the query tab, paste the query below, and click Run. Here is our search string: graph data and analyze it in graphdb.

Here’s the matched tweet, which made it to the result.

Let’s Go and catch @francesc at @Gopherpalooza today, as he scans into Go source code by building its Graph in Dgraph!

Be there, as he Goes through analyzing Go source code, using a Go program, that stores data in the GraphDB built in Go!#golang #GraphDB #Databases #Dgraph pic.twitter.com/sK90DJ6rLs

If you observe, you can see some of the words from the search strings are not present in the matched tweet, but the tweet has still made it to the result.

To be able to use the Full-text search capability effectively, we must understand how it works.

Let’s understand it in detail.

The search string also goes through the same processing pipeline, and fulltext tokens generated them too.

Here are the steps to generate the fulltext tokens:

You would have seen in the fourth episode that Dgraph allows you to build multi-lingual apps.

Below is the table with the matched tweet and its search string in the first column. The second column contains their corresponding fulltext tokens generated by Dgraph.

As you can see from the table, you can see that the tweets are reduced to an array of strings or tokens (Dgraph internally uses Bleve package to do the stemming).

If you’re interested to see Dgraph’s fulltext tokenizer in action, here is the gist containing the instructions to use it.

Dgraph generates the same fulltext tokens even if the words in a search string is differently ordered. Hence, using the same search string with different order would not impact the query result.

As you can see, all three queries below are the same for Dgraph.

Next, let’s move onto the second advanced text search feature of Dgraph: regular expression based queries. We will use them to find all the hashtags containing the following substring: graph.

Using regular expression based search, let’s match all the hashtags that have this particular pattern: Starts and ends with any characters of indefinite length, but with the substring graph in it.

Here is the regex expression we can use: ^.*graph.*$

Check out this tutorial if you’re not familiar with writing a regular expression.

Let’s first find all the hashtags in the database using the has() function.

If you’re not familiar with using the has() function, refer to the first episode of the series.

You can see that we have six hashtags in total, and four of them have the substring graph in them: Dgraph, GraphQL, graphqlconf, graphDB.

Here is the syntax of the regexp funtion: regexp(predicate, /regular-expression/)

Let’s execute the following query to find the hashtags that have the substring graph.

Go to the query tab, type in the query, and click Run.

Oops! We have an error! It looks like we forgot to set the trigram index on the hashtag predicate.

Again, setting a trigram index is similar to setting any other string index, let’s do that for the hashtag predicate.

Note: Refer to the previous episode if you’re not sure about creating an index on a string predicate.

Note: Refer to the first episode if you’re not familiar with the query structure in general.

Now we have success! But why do we only have the following hashtags Dgraph and graphqlconf in the result? That’s because regexp function is case-sensitive by default.

Add the character i at the the end of the second argument of the regexp function to make it case insensitive: regexp(predicate, /regular-expression/i)

Now we have the four hashtags with substring graph in them.

Let’s modify the regular expression to match only the hashtags which have a prefix called graph.

In this tutorial, we learned about Full-text search and regular expression based search capabilities in Dgraph.

Did you know that Dgraph also offers fuzzy search capabilities, which can be used to power features like product search in an e-commerce store? Let’s learn about it in our next tutorial.

Till then, happy Graphing!

Remember to click the “Join our community” button below and subscribe to our newsletter to get the latest tutorial right to your inbox.

Custom encoding: Go implementation in net/rpc vs grpc and why we switched

Why you should build your next app with a graph database