This is the second post in a two-part series exploring the Go compiler. In
part 1,
we added a new statement to the Go language by building a custom version of the
compiler. To do this, we’ve covered the first five stages of the compiler per
this diagram:

We ended up implementing until by lowering it to for in the “rewrite
AST” stage; specifically, in gc/walk.go where other, similar transformations
are done before the compiler gets to SSA conversion and code generation.

In this part, we’ll cover the remaining stages of the compiler by handling the
new until statement later on in the compilation flow.

What does SSA mean, and why does the compiler do this? Let’s start with the
first question; I recommend reading the SSA wikipedia page linked above and
additional resources, but here is a quick explanation.

Static single assignment means that every variable assigned in the IR is only
assigned once. Consider this pseudo-IR:

This is not SSA, because the names x and y are assigned multiple times.
If we convert this snippet to SSA, we may get something like:

Note how every assignment got a unique variable name. When x got reassigned
a different value, a new name x_1 was created instead. You may wonder how
this works in the general case… what happens with code like this:

If we simply rename the second assignment to x_1 = 2, what will use
take? x or x_1 or …? To handle this important scenario, IRs in SSA
form have special phi (originally phony) functions that select a value
based on which code path it came from. It’s going to look like this: 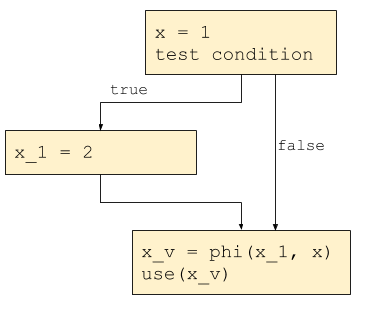 This phi node is used by the compiler to maintain SSA while analyzing and
optimizing such IRs, and is replaced by actual machine code at a later stage.

The static part of the SSA name plays a role similar to the one in static
typing; it means the assignment for each name is unique
when looking at the source code (at compile time, or statically), while it can
happen multiple times at run-time. If the code sample shown above is in a loop,
then the actual x_1 = 2 assignment can happen many times.

Now that we have a basic idea of what SSA is, the next question is why.

Optimizations are an important part of a compiler backend [1], and backends
are usually structured specifically to facilitate effective and efficient
optimizations. Looking at this code snippet again:

And suppose the compiler wants to run a very common optimization – constant
propagation; that is, it wants to replace all uses of x with 1 after
the x = 1 assignment. How would it go about that? It can’t just find all
the references to x following the assignment because x can be rewritten
to something else (as in our example).

In the general case, the compiler has to perform data-flow analysis to find:

Such analysis is expensive to create and to maintain, both in terms of time and
space. Moreover, it has to be rerun after every optimization (at least
partially).

SSA provides a great alternative. If z = x + y is in SSA, we know
immediately which definitions x and y refer to (there can only be one!),
and we know immediately where z is used (all references to z following
this statement). In SSA, the uses and definitions are encoded in the IR, and
optimizations don’t violate the invariant.

SSA in the Go compiler

We move on to describe how SSA is constructed and used in the Go compiler.
SSA is a relatively new addition to Go.
Much of its code lives in ssa/, except a large
chunk of code that translates ASTs to SSA, which lives in gc/ssa.go.
The README file in the ssa directory is a very useful explanation of
the Go SSA – check it out!

The Go SSA implementation also has some of the best compiler tooling I’ve seen
(having worked on compilers for many years). By setting the GOSSAFUNC
environment variable, we get an HTML page with all the compilation stages and
the IR after each, so we can easily detect which optimization goes awry
if needed. An additional setting can draw the control-flow graph as SVG
for every pass.

Let’s study the initial SSA created from AST for this code snippet:

The reason I moved the printout to its own function is to make the result SSA
cleaner. Compiling with -l to disable inlining, this leaves a tiny call
for sayhi() (whereas the call for fmt.Printl generates much more code
due to the constant string).

The resulting SSA is:

The interesting pieces to note here are:

Incidentally, the kind of for loop here is exactly what we’d like to
transform our until statements to.

Converting until AST nodes to SSA

As usual, our code will be modeled on the handling of for statements.
First, let’s start by sketching how the control-flow graph should look for
until statements: 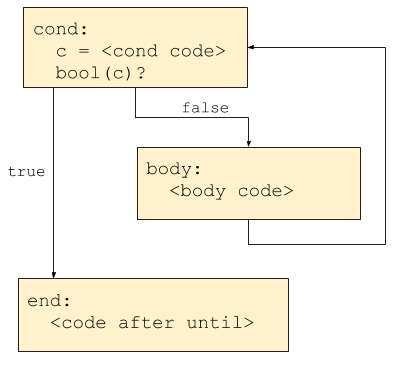 Now we just have to build this CFG in code. Reminder: the new AST node type we
added in part 1
is OUNTIL. We’ll add a new switch clause in the state.stmt method in
gc/ssa.go to translate an AST node with the OUNTIL op to SSA. The naming
of blocks and comments should make following the code easy and provide
correlation to the CFG shown above.

If you’re wondering where n.Ninit is handled – it’s done before the
switch, uniformly for all node types.

In fact, this is all we have to do to handle until statements in the last
stages of the compiler! If we run the compiler – dumping the SSA as before – on
this code:

We’ll get SSA which is structurally equivalent to the one we had for the for
loop with a negated condition, as expected.

After the initial SSA is constructed, the compiler runs a long sequence of
passes on the SSA IR to:

All the passes can be found in the passes slice in ssa/compile.go, and
some constraints on the order in which they can be run in the passOrder
slice in the same file. The optimizations are fairly standard for modern
compilers. Lowering consists of instruction selection for the specific
architecture we’re compiling, and register allocation.

For additional details on these passes see the SSA README
and also this post, which
goes into interesting details of how SSA optimization rules are specified.

Finally, the compiler invokes genssa (in gc/ssa.go) to emit machine
code from the SSA IR. We don’t have to modify any of this code because the SSA
we’ve emitted for until statements consists of building blocks that are
used elsewhere in the compiler – we don’t add new instruction types, etc.

However, it’s instructional to study the machine code generated for our
useuntil function. Go has its own assembly syntax with historical roots. I won’t go into all the
details here, but the following is an annotated (with # comments) assembly
dump which should be reasonably easy to follow. I’ve removed some directives
for the garbage collector (PCDATA and FUNCDATA) to make the output
smaller.

If you’re paying attention, you may have noticed that the “cond” block moved
to the end of the function, which is not where it was originally in the
SSA representation. What gives?

The answer is the “loop rotate” pass that runs on SSA towards the very end.
This pass reorders the blocks such that the body flows directly into the cond,
avoiding an extra jump per iteration. See ssa/looprotate.go for more details
if you’re interested.

That’s it! In these two posts we’ve examined some of the internals of the Go
compiler by implementing a new statement in two different ways. This is only
the tip of the iceberg, of course, but I hope it provides a good starting point
to begin exploring on your own.

A final note: we’ve built a working compiler here, but none of the Go tooling
will recognize the new until keyword. Unfortunately, at this time the Go
tooling uses a completely different path for parsing Go code and doesn’t share
this code with the Go compiler itself. I’ll write about processing Go code with
tools in much more detail in future posts.

To reproduce the version of the Go toolchain we ended up with here, you can
start from
part 1,
revert the AST transformation code in walk.go and
then add the AST->SSA transofmation described above. Or you could just grab the
adduntil2 branch from my fork.

To get the SSA for all the SSA and code generation passes in a single convenient
HTML file, run the following after building the toolchain:

And open ssa.html in your browser. If you also want to see the CFG for
some pass, add the pass name after the function name, separated by :; for
example GOSSAFUNC=useuntil:number_lines.

To get the machine code dump, run:

Graceful shutdown of a TCP server in Go

How to send good pull requests on GitHub