Imagine a set of 2D rectangles of different sizes; let’s assume for the sake of
simplicity that no two rectangles in this set have exactly the same size.
Here is a sample set: 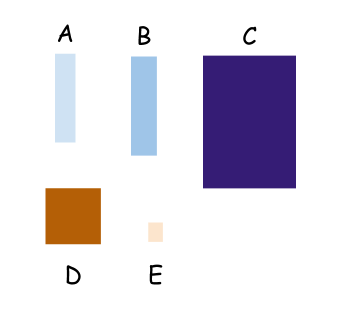 We’ll say that box X fits inside box Y if we could physically enclose X
inside Y; in other words, if Y’s dimensions are larger than X’s. In this
example:

As we’re going to see soon, in this case “fits” is a partial order on a set of
2D rectangular boxes, because even though we can order some of the boxes
relative to each other, some other pairs of boxes have no relative order among
themselves (for example A and D).

If all pairs of boxes in this set had relative ordering – for example, consider
the set without box D – we could define a total order on the set. Another
example for this is a set of 2D squares (rather than rectangles); as long
as all the squares in the set have unique sizes [1], we can always define a
total order on them because for any pair of squares either the first can fit in
the second, or vice versa.

To develop a mathematically sound approach to ordering, we’ll have to dip our
feet into set theory and relations. We’ll only be talking about binary
relations here.

Given a set A, a relation on A is a set of pairs with elements taken from A.
A bit more rigorously, given that Atimes A is the set containing all
possible ordered pairs taken from A (a.k.a. the Cartesian product of A), then
R is a relation on A if it’s a subset of Atimes A, or Rsubseteq
Atimes A.

Note that we explicitly defined the pairs to be ordered, meaning that (1,2)
and (2,1) are two distinct elements in this set.

By definition, any subset of Atimes A is a relation on A. For example
R={left(1,1right),left(2,2right),left(3,3right)}. In
programming, we often use the term predicate to express a similar idea. A
predicate is a function with a binary outcome, and the correspondence to
relations is trivial – we just say that all pairs belonging to the relation
satisfy the predicate, and vice versa. If we defined a predicate R(x,y) to
be true if and only if x==y, we’d get the relation above.

A shortcut notation that will make definitions cleaner: we say xRy when
left(x,yright)in R. In our example set 1R1, 2R2 and 3R3. This
notation is a bit awkward, but it’s the accepted standard in math; therefore I’m
using it for consistency with other sources.

Besides, it becomes nicer when R is an operator. If we redefine R as ==, it
becomes more natural: 1==1, 2==2, 3==3. The equality relation is
a perfectly valid relation on a set – its elements are all the pairs where both
members are the same value.

There are a number of useful properties relations could have. Here are
just a few that we’ll need for the rest of the article; for a longer list,
see the Wikipedia page.

Reflexive: every element in the set is related to itself, or
forall xin A, xRx. The == relation shown above is
reflexive.

Irreflexive: no element in the set is related to itself, or
negexists xin A, xRx. For example if we define the < less than
relation on numbers, it’s irreflexive since no number is less than itself.
In our boxes example, the “fits in” relation is irreflexive because no box can
fit inside itself.

Transitive: intuitively, “if x fits inside y, and y fits inside z, then x
fits inside z”. Mathematically
forall x,y,z in A, left(xRy wedge yRz right )rightarrow xRz.
The < relation on numbers is obviously transitive.

Symmetric: if x is related to y, then y is related to x. This might sound
obvious with the colloquial meaning of “related”, but not in the mathematical
sense. Most relations we deal with aren’t symmetric. The definition is
forall x,y in A, xRy rightarrow yRx. For example, the relation ==
is symmetric, but < is not symmetric.

Antisymmetric: if x is related to y, then y is not related to x unless
x and y are the same element; mathematically
forall x,y in A, left(xRy wedge yRx right ) rightarrow x=y.
For example, the relation le (less than or equal) is antisymmetric;
if x le y and also y le x then it must be that x and y are
the same number. The relation < is also antisymmetric, though in the empty
sense because we won’t be able to find any pair x and y to satisfy the left
side of the definition; in logic this is called vacuously.

A weak partial order (a.k.a. non-strict) is a relation on a set A that is
reflexive, transitive and antisymmetric. The le relation on numbers is
a classical example:

Our rectantular boxes with the “fits” relation is a good example to distinguish
between the two. We can only define a strong partial order on them, because
a box cannot fit inside itself.

Another good example is a morning dressing routine. The set of clothes to wear
is {underwear, pants, jacket, shirt, left sock, right sock, left shoe, right
shoe}, and the relation is “has to be worn before”. The following drawing
encodes the relation: 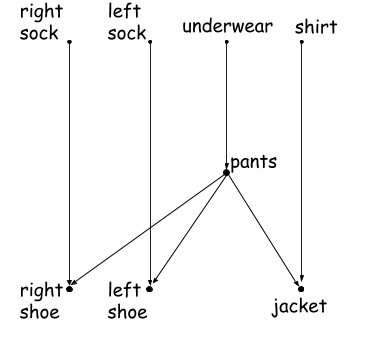 This kind of drawing is called a Hasse diagram, which is useful to graphically
represent partially ordered sets [2]; the arrow represents the relation. For
example, the arrow from “pants” to “left shoe” encodes that pants have to be
worn before the left shoe.

Note that this relation is irreflextive, because it’s meaningless to say that
“pants have to be worn before wearing pants”. Therefore, the relation defines
a strong partial order on the set.

Similarly to the rectangular boxes example, the partial order here lets us order
only some of the elements in the set w.r.t. each other. Some elements like
socks and a shirt don’t have an order defined.

A total order is a partial order that has one additional property – any two
elements in the set should be related. Mathematically:

Partial and total orders frequently come up in programming, especially when
thinking about sorts. Sorting an array usually implies finding some
total order on its elements. Tie breaking is important, but not always
possible. If there is no way to tell two elements apart, we cannot
mathematically come up with a total order, but we can still sort (and we do have
a weak partial order). This is where the distinction between regular and stable
sorts comes in.

Sometimes we’re sorting non-linear structures, like dependency graphs in the
dressing example from above. In these cases a total order is impossible, but we
do have a partial order which can be useful to find a “valid” dressing order – a
linear sequence of dressing steps that wouldn’t violate any constraints. This
can be done with topological sorting
which finds a valid “linearization” of the dependency graph.