Due to variation between operating systems and the way OS courses are taught,
some programmers may have an outdated mental model about the difference between
processes and threads in Linux. Even the name “thread” suggests something
extremely lightweight compared to a heavy “process” – a mostly wrong intuition.

In fact, for the Linux kernel itself there’s absolutely no difference between
what userspace sees as processes (the result of fork) and as threads (the
result of pthread_create). Both are represented by the same data structures
and scheduled similarly. In kernel nomenclature this is called tasks (the
main structure representing a task in the kernel is
task_struct),
and I’ll be using this term from now on.

In Linux, threads are just tasks that share some resources, most notably their
memory space; processes, on the other hand, are tasks that don’t share
resources. For application programmers, proceses and threads are created and
managed in very different ways. For processes there’s a slew of
process-management APIs like fork, wait and so on. For threads there’s
the pthread library. However, deep in the guts of these APIs and libraries,
both processes and threads come into existence through a single Linux system
call – clone.

Here is a code sample
demonstrating the most important sharing aspect of threads – memory. It uses
clone in two ways, once with the CLONE_VM flag and once without.
CLONE_VM tells clone to share the virtual memory between the calling
task and the new task clone is about to create [1]. As we’ll see later on,
this is the flag used by pthread_create:

Some things to note when clone is invoked:

This code sample passes a buffer into the child, and the child writes a string
into it. When called without the vm command-line argument, the CLONE_VM
flag is off, and the parent’s virtual memory is copied into the child. The child
sees the message the parent placed in buf, but whatever it writes into
buf goes into its own copy and the parent can’t see it. Here’s the output:

But when the vm argument is passed, CLONE_VM is set and the child
task shares the parent’s memory. Its writing into buf will now be observable
from the parent:

A bunch of other CLONE_* flags can specify other things that will be shared
with the parent: CLONE_FILES will share the open file descriptors,
CLONE_SIGHAND will share the signal dispositions, and so on.

Other flags are there to implement the semantics required by POSIX threads. For
example, CLONE_THREAD asks the kernel to assign the same thread group id
to the child as to the parent, in order to comply with POSIX’s requirement of
all threads in a process sharing a single process ID [2].

Let’s dig through some code in glibc to see how clone is invoked, starting
with fork, which is routed to __libc_fork in sysdeps/nptl/fork.c. The
actual implementation is specific to the threading library, hence the location
in the nptl folder. The first thing __libc_fork does is invoke the
fork handlers potentially registered beforehead with pthread_atfork.

The actual cloning happens with:

Where ARCH_FORK is a macro defined per architecture (exact syscall ABIs are
architecture-specific). For x86_64 it maps to:

The CLONE_CHILD_* flags are useful for some threading libraries (though not
the default on Linux today – NPTL). Otherwise, the invocation is very similar
to the clone code sample shown in the previous section.

You may wonder where is the function pointer in this call. Nice catch! This is
the raw call version of clone, where execution continues from the point
of the call in both parent and child – close to the usual semantics of fork.

Now let’s turn to pthread_create. Through a dizzying chain of macros it
reaches a function named create_thread (defined in
sysdeps/unix/sysv/linux/createthread.c) that calls clone with:

Browse through man 2 clone to understand the flags passed into the call.
Briefly, it is asked to share the virtual memory, file system, open files,
shared memory and signal handlers with the parent thread/process. Additional
flags are passed to implement proper identification – all threads launched from
a single process have to share its process ID to be POSIX compliant.

Reading the glibc source code is quite an exercise in mental resilience, but
it’s really interesting to see how everything fits together “in the real world”.

Given the information presented earlier in the post, I would expect process
creation to be somewhat more expensive than thread creation, but not
dramatically so. Since fork and pthread_create route to the same system
call in Linux, the difference would come from the different
flags they pass in. When pthread_create passes all these CLONE_* flags,
it tells the kernel there’s no need to copy the virtual memory image, the open
files, the signal handlers, and so on. Obviously, this saves time.

For processes, there’s a bit of copying to be done when fork is invoked,
which costs time. The biggest chunk of time probably goes to copying the memory
image due to the lack of CLONE_VM. Note, however, that it’s not just copying
the whole memory; Linux has an important optimization by using COW (Copy On
Write) pages. The child’s memory pages are initially mapped to the same pages
shared by the parent, and only when we modify them the copy happens. This is
very important because processes will often use a lot of shared read-only memory
(think of the global structures used by the standard library, for example).

That said, the page tables still
have to be copied. The size of a process’s page tables can be observed by
looking in /proc/<pid>/status – the VmPTE indicator. These can be around
tens of kilobytes for small processes, and higher for larger processes. Not a
lot of data to copy, but definitely some extra work for the CPU.

I wrote a benchmark
that times process and threads launches, as a function of the virtual memory
allocated before fork or pthread_create. The launch is averaged over
10,000 instances to remove warm-up effects and jitter: 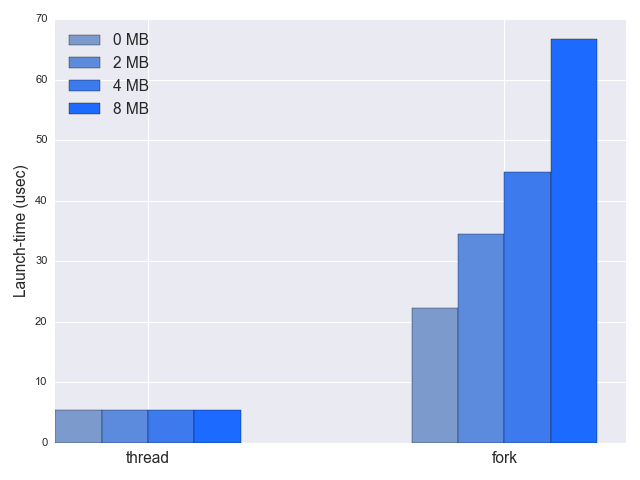 Interestingly, it’s easy to observe from these numbers that not the whole memory
image is being copied. On the same machine this benchmark was run on, just a
simple memcpy of 2 MB takes over 60 us, so it couldn’t have copied 2 MB of
heap to the child in the 30 us difference. Copying 64K (a reasonable size for a
page table) takes 3 us, which makes sense because the cloning involves more than
a simple memcpy. To me this is another sign of how fast these launches are,
since we’re in the same ballpark of performance with modestly sized memory
copies.

Creation time is not the only performance benchmark of importance. It’s also
interesting to measure how long it takes to switch context between tasks when
using threads or processes. This is covered in another post.