While preparing the post on minimal char-based RNNs,
I coded a simple Markov chain text generator to serve as a comparison for the
quality of the RNN model. That code turned out to be concise and quite elegant
(IMHO!), so it seemed like I should write a few words about it.

It’s so short I’m just going to paste it here in its entirety, but
this link
should have it in a Python file with some extra debugging information for
tinkering, along with a sample input file.

Without going into too much details, a Markov Chain is a model describing the
probabilities of events based on the current state only (without having to
recall all past states). It’s very easy to implement and “train”.

In the code shown above, the most important part to grok is the data structure
model. It’s a dictionary mapping a string state to the probabilities of
characters following this state. The size of that string is configurable, but
let’s just assume it’s 4 for the rest of the discussion. This is the order of
the Markov chain. For every string seen in the input, we look at the character
following it and increment a counter for that character; the end result is a
dictionary mapping the alphabet to integers. For example, we may find that for
the state “foob”, ‘a’ appeared 75 times right after it, ‘b’ appeared 25 times,
‘e’ 44 times and so on.

The learning process is simply sliding a “window” of 4 characters over the
input, recording these appearances: 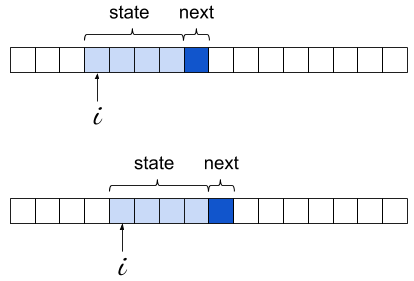 The learning loop is extremely concise; this is made possible by the right
choice of Python data structures. First, we use a defaultdict for the model
itself; this lets us avoid existence checks or try for states that don’t
appear in the model at all.

Second, the objects contained inside model are of type Counter, which is
a subclass of dict with some special sauce. In its most basic usage, a
counter is meant to store an integer count for its keys – exactly what we need
here. So a lot of power is packed into this simple statement:

If you try to rewrite it with model being a dict of dicts, it will become
much more complicated to keep track of the corner cases.

With the learning loop completed, we have in model every 4-letter string
encountered in the text, mapped to its Counter of occurrences for the
character immediately following it. We’re ready to generate text, or “sample
from the model”.

We start by picking a random state that was seen in the training text. Then, we
loop for an arbitrary bound and at every step we randomly select the following
character, and update the current state. The following character is selected
using weighted random selection
– precisely the right idiom here, as we already have in each counter the
“weights” – the more often some char was observed after a given state, the
higher the chance to select it for sampling will be.

Starting with Python 3.6, the standard library has random.choices to
implement weighted random selection. Before Python 3.6 we’d have to write that
function on our own (Counter has the most_common() method that would
make it easier to write an efficient version).