Unfortunatly for Bob, his test is positive; what’s the probability that Bob
actually has the disease?

You might be tempted to say 90%, but this is wrong. One of the most common
fallacies made in probability and statistics is mixing up conditional
probabilities. Given event D – “Bob has disease” and event T – “test was
positive”, we want to know what is P(D|T) – the conditional probability
of D given T. But the test result is actually giving us P(T|D) – which
is distinct from P(D|T).

In fact, the problem doesn’t provide enough details to answer the question. An
important detail that’s missing is the prevalence of the disease in
population; that is, the value of P(D) without being conditioned on
anything. Let’s say that it’s a moderately common disease with 2% prevalence.

To solve this without any clever probability formulae, we can resort to the
basic technique of counting by cases. Let’s assume there is a sample of 10,000
people [1]; test aside, how many of them have the disease? 2%, so 200. 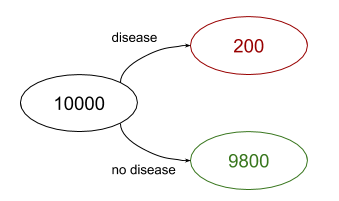 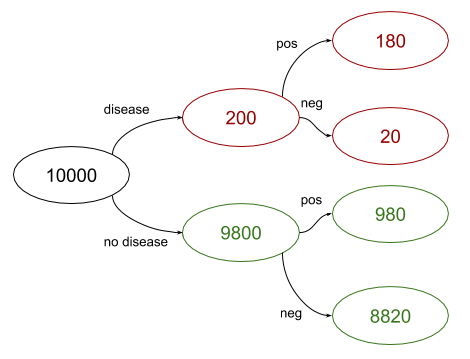 Now we just have to count. There are 980 + 180 = 1160 people who tested positive
in the sample population. Of these people, 180 have the disease. In other words,
given that Bob is in the “tested positive” population, his chance of having
the disease is 180/1160 = 15.5%. This is far lower than the 90% test accuracy;
conditional probability often produces surprising results. To motivate this,
consider that the number of true positives (people with the disease that
tested positive) is 180, while the number of false positives (people w/o the
disease that tested positive) is 980. So the chance of being in the second group
is larger.

As the examples shown above demonstrate, conditional probabilities involve
questions like “what’s the chance of A happening, given that B happened”, and
they are far from being intuitive. Luckily, the mathematical theory of
probability gives us the precise and rigorous tools necessary to reason about
such problems with relative elegance.

The conditional probability P(A|B) means “what is the probability of
event A given that we know event B occurred”. Its mathematical definition is:

The first time you look at it, the definition of conditional probability looks
somewhat unintuitive. Why is the connection made this way? Here’s a
visualization that I found useful: 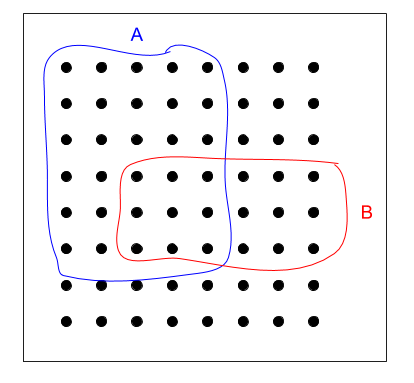 The dots in the black square represent the “universe”, our whole sampling
space (let’s call it S, and then P(S)=1). A and B are events. Here
P(A)=frac{30}{64} and P(B)=frac{18}{64}. But what is
P(A|B)? Let’s figure it out graphically. We know that the outcome is one
of the dots encircled in red. What is the chance we got a dot also encircled in
blue? It’s the number of dots that are both red and blue, divided by the total
number of dots in red. Probabilities are calculated as these counts normalized
by the size of the whole sample space; all the numbers are divided by 64, so
these denominators cancel out; we’ll have:

In words – the probability that A happened, given that B happened, is 1/2, which
makes sense when you eyeball the diagram, and assuming events are uniformly
distributed (that is, no dot is inherently more likely to be the outcome than
any other dot).

Another explanation that always made sense to me was to multiply both sides of
the definition of conditional probability by the denominator, to get:

In words: we know the chance that A happens given B; if we multiply this by the
chance that B happens, we get the chance both A and B happened.

Finally, since P(Acap B)=P(Bcap A), we can freely exchange A and B in
these definitions (they’re arbitrary labels, after all), to get:

This is an important equation we’ll use later on.

By definition, two events A and B are independent if:

Using conditional probability, we can provide a slightly different definition.
Since:

Independence also extends to the complements of events. Recall that
P(B^C) is the probability that B did not occur, or 1-P(B);
since conditional probabilities obey the usual probability axioms, we
have: P(B^C|A)=1-P(B|A). Then, if A and B are independent:

Starting with equation (1) from above:

And taking the right-hand-side equality and dividing it by P(B) (which
is positive, per definition), we get Bayes’s theorem:

This is an extremely useful result, because it links P(B|A) with
P(A|B). Recall the disease test example, where we’re looking for
P(D|T). We can use Bayes theorem:

We know P(T|D) and P(D), but what is P(T)? You may be
tempted to say it’s 1 because “well, we know the test is positive” but that
would be a mistake. To understand why, we have to dig a bit deeper into the
meanings of conditional vs. unconditional probabilities.

Prior and posterior probabilities

How do we update our beliefs in light of new data?

This should make it clearer why we can’t just assign P(T)=1. Instead,
recall the “counting by cases” exercise we did in the first example, where we
produced a tree of all possibilities; let’s formalize it.

Suppose we have the sample space S and some event B. Sometimes it’s easier to
find the probability of B by first partitioning the space into disjoint pieces:

Then, because the probabilities of A_n are disjoint, we get:

Now we have everything we need to provide a Bayesian solution to the disease
test example. Recall that we already know:

Now we want to compute P(T). We’ll use the law of total probability,
with the space partitioning of “has disease” / “does not have disease”:

Finally, plugging everything into Bayes theorem:

Which is the same result we got while working through possibilities in the
example.

Let’s assume T_1 is our original test. T_2 is a slightly
different test that’s only 80% accurate. Importantly, the tests are
independent (they test completely different things) [2].

The disease prevalence is still 2%, and using the law of total probability we
get:

In other words, if a person tests positive with the second test, the chance of
being sick is only 7.5%. But what if they tested positive for both tests?

Unfortunately, this computation is wrong, very wrong. Can you spot why before
reading on?

We’ve committed a fairly common blunder in conditional probabilities. Given the
independence of P(T_1|D) and P(T_2|D), we’ve assumed the
independence of P(D|T_1) and P(D|T_2), but this is wrong! It’s
even easy to see why, given our concrete example. Both of them have P(D)
– the disease prevalence – in the numerator. Changing the prevalence will change
both P(D|T_1) and P(D|T_2) in exactly the same proportion; say,
increasing the prevalence 2x will increase both probabilities 2x. They’re
pretty strongly dependent!

The right way of finding P(D|T_1cap T_2) is working from first
principles. T_1cap T_2 is just another event, so treating it as such
and using Bayes theorem we get:

Combining them all together we’ll get P(D|T_1cap T_2)=0.42; the chance
of being sick, given two positive tests, is 42%, which is twice higher than our
erroneous estimate [3].

In other words, the connection between P(A|B) and P(B|A) is true
even when everything is conditioned on some event C. To prove it, we can take
both sides and expand the definitions of conditional probability until we reach
something trivially true:

Using this new result, we can compute our two-test disease exercise in another
way. Let’s say that T_1 happens first, and we’ve already computed
P(D|T_1). We can now treat this as the new prior data, and find
P(D|T_1cap T_2) based on the new evidence that T_2 happened.
We’ll use the conditioned Bayes formulation with T_1 being C.

We already know that P(D|T_1) is 0.155; What about
P(T_2|Dcap T_1)? Since the tests are independent,
this is actually equivalent to P(T_2|D), which is 0.8. The denominator
requires a bit more careful computation:

We’ve reached the same result using two different approaches, which is
reassuring. Computing with both tests taken together is a bit quicker, but
taking one test at a time is also useful because it lets us update our beliefs
over time, given new data.

Computing conditional probabilities w.r.t. multiple parameters is very useful
in machine learning – this would be a good topic for a separate article.