Controlling a Digispark board

The Digispark is perhaps as small as a microcontroller board for DIY electronics can get. This is a short writedown about my first experiences with controlling this board through Go code, using Gobot and LittleWire.

A tiny microcontroller board

It was after the latest Munich Gophers Meetup when a few of us went to a local bar to talk about Go, life, and hardware. Yes, hardware. From foldable USB keyboards to Raspberry Pi Zero W to some incredibly small microcontroller board called Digispark. 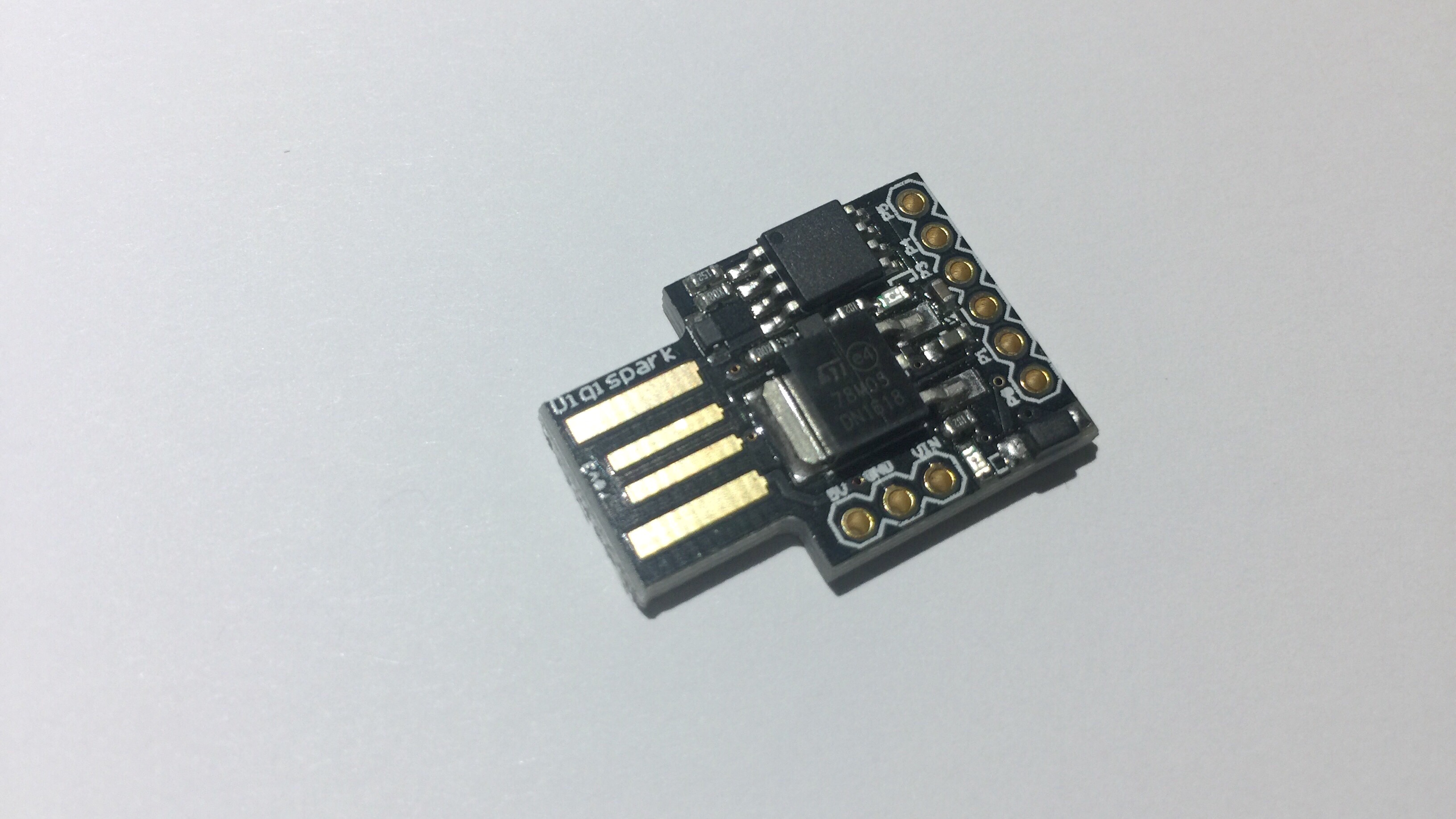 This one caught my attention. (Ok, the board is nothing new, but I did not hear of it before.) The Digispark is a board built around an ATtiny85 microcontroller chip and features –

This tiny board connects directly to an USB port of a host computer and can be equipped with Arduino scripts (with restrictions of course, it is a much smaller controller than the one on the Arduino boards), but this is not an Arduino blog, so here comes the Go part.

UPDATE: Since the article was first published, the installation steps have considerably changed, and are even simpler now, thanks to the helpful comment from Ron Evans of gobot.io. Hence most of the following section has been rewritten. (The original article is available here but it is really only of historical interest.)

Controlling a Digispark board from Go code

With a few more (software) ingredients, the I/O ports can be controlled from Go code running on a PC/Mac/LinuxBox/etc. These are:

LittleWire is basically a script that adds USB communication capabilities to the Digispark. With an accompanying library at the USB host’s end, the board’s I/O ports can be remote-controlled from an app running on the host.

Gobot is a Go robotics framework that connects Go apps to a large array of electronic devices, from the little Digispark to Arduino, Raspberry Pi, and even Quadrocopters.

Gort is a CLI tool for Gobot and other (non-Go) robotics frameworks. Here we use it for installing LittleWire on the Digispark board.

And here is how I used all this to make the onboard status LED blink, and a servo motor move.

For Mac and Linux, some USB libraries need to be installed. On the Mac, this is a one-liner if you have Homebrew installed.

On Ubuntu (and surely also on other Debian-based distributions), a simple apt-get does the trick.

Now I was ready to fetch Gobot and install the Digispark platform package. (If you are new to Go: the ellipsis at the end of the go get line advise the go get tool to also download all subprojects, even if the top project does not import them. The -d is also important as this prevents the go get tool from installing anything at this point. The only thing we want to install is the Digispark package.)

Gort can be downloaded from gort.io or build from source. On a Mac you can also use Homebrew to enjoy automatic updates:

and a second one uploads it to the Digispark controller.

The second command waits until the controller is plugged into an USB port. This ensures that the controller listens to the host, as the micronucleus bootloader cuts the connection after a few seconds, in order to make all ports available for I/O.

On my end, the upload command failed until I switched to an old USB-2 hub. The Digispark docs on gobot.io mention an issue with USB-3 and Mac Book Pros from 2012. I have no Mac Book Pro, but my Mac Mini is also from 2012, maybe it shares the same USB controller with the MBP.

Anyway, the Digispark board is now ready to receive commands. Time to write some Gobot-fueled code.

After everything was in place, I wrote the below code to make the onboard LED blink and let a servo move from 0 to 180 degrees in steps of 45 degrees. This video shows the outcome:

But now on to the code:

Besides the gobot package, we also need the gpio package for controlling
the pins, and the digispark package for talking to the Digispark board via
USB.

An adaptor provides the connection to a device.

The gpio package contains drivers for various sensor and actor hardware.
Here, we use the LED and servo drivers.
Each driver needs the adaptor to use and the number of the pin to control.

work is the main routine that a Gobot robot executes. We will pass this func
to NewRobot.

Every plans actions in fixed intervals. It does not wait for previous
actions to complete before triggering the next action.

After schedules an action after a specific time. It does not wait.

Here we switch the LED on and off.

Every returns a *Ticker that we stop after a while.

Move moves the servo into the given position
(between 0 and 180 degrees).

180 is the theoretical maximum, but this makes my servo try moving too far. 170 works just fine.

Let’s stop this after 30 seconds.

Now we can create a “robot” using the items we defined above.

Finally we just need to start our robot.

This code is only useful if you have a Digispark at hand, but in any case, here are the installation instructions.

Step 1: go get the code. Note the -d flag that prevents auto-installing
the binary into $GOPATH/bin.

Controlling hardware can be quite fun! I already envision a couple of neat (and useless) things I could create:

A big part of the fun surely is the Gobot framework. It certainly deserves a closer look! Maybe I write another post when/if I have enough time and some more hardware to test out.

Can it get cheaper than that?

If you want to control devices, e.g. an LC display, without any additional controller hardware, hop over to this post on Dave Cheney’s blog and learn how to connect an LC display to an unused monitor port (HDMI, DVI, VGA – either of these works).

Inverse Kinematics: how to move a robotic arm (and why this is harder than it seems)

How to Create PDF Documents