Want to equip your command-line application with a nice visual user interface? TUI libraries are here to help.

Console applications usually take some parameters at start, and maybe some more input through basic console I/O. And that’s ok in most cases, though sometimes it would be great to have a visual user interface but without the code size and complexity of a full-blown Web app.

OK, so can we do a side-by-side test, please?

Originally, I planned to evaluate three to four TUI libraries for Go side-by-side, using a sample app definition with a specific set of features to be tested. I had a few requirements on the libraries: They should –

Turned out that none of the libraries I found passes all of the requirements.

So that’s it? No single all-in-one, high-level GUI lib with decent documentation?

Well, not if you really want all those nifty UI features at once. However, if you can forego some of the requirements, there is indeed a small selection of capable TUI libraries at your disposal that I’ll briefly introduce below.

Just one thing before we start.

The list is (and cannot) be complete. I used GitHub.com, awesome-go.com, GolangLibs.com, and LibHunt.com to find TUI libraries but still there is no guarantee that I found all relevant projects out there.

Without the tips of a couple of redditors in this /r/golang thread, clui and wm would perhaps have slipped through.

And then, of course, the above list of criteria is a very fuzzy filter, and you might have included a library that I ruled out because of this list.

But now let’s move on to the TUI library overview.

If you are fine with building your UI on top of a handful of UI primitives, there are two libraries that look fairly stable and complete:

termbox has a small and straightforward API. It uses a two-dimensional cell buffer to represent the terminal screen, with a few methods like setting cells, clearing the screen, or setting the cursor. All input, whether keyboard, mouse, or resize events, is tracked through a unified Event type.

As simple as the API might seem, it has not prevented others from creating interesting projects on top of termbox, including higher-level TUI libraries (termui, gocui, tui-go and termloop`), simple games, godit (a text editor) and hecate (a hex editor), and more.

According to the author, tcell was born out of the need for certain features that termbox-go does not provide, and patching termbox-go turned out to not be a suitable way to go forward. tcell claims to have a couple of advantages over termbox-go, including additional functionality, better portability, better I/O, better support for mouse, Unicode, colors, and more. (I cannot comment on these claims, as I have tested neither termbox nor tcell in great depth.)
tcell is the TUI library behind the Micro editor, and is also used by godu.

According to the README, tcell works on POSIX systems that provide a POSIX termios implementation with /dev/tty, as well as on Windows.

The “POSIX” requirement includes Linux, macOS, FreeBSD, and Solaris, and certainly more systems that are not explicitly listed in the README.

termui is one of the high-level TUI’s that are built on top of termbox-go. It is specialized on displaying information in graphical form – as bar chart, line diagram, spark line, or as a gauge. Text output is also possible of course. The UI is built on the concept of widgets, or blocks, that contain exactly one type of data representation – text, charts, or diagrams.

termui provides a static layout and a grid layout. The grid layout can respond dynamically to resizing of the terminal window.

On the input side, termui offers a simple event handling system that can react to key presses, window resizes, or timers.

What is missing from termui to make it a “feature-complete” TUI toolkit is high-level input handling (input boxes, buttons, menus, drop-down lists etc). I also missed some sort of resizeable panes, although the grid layout probably provides a suitable alternative to that.

A couple of projects have already been built with termui, including ctop.

This library almost seems like the opposite of termui: No fancy widgets anywhere, but instead, building blocks for split views, overlapping views, editable views, and event handling for keyboard and mouse events.

I couldn’t resist including the following projects here, although they do not meet some of the inclusion criteria. Still, they look very promising and may offer one or the other feature that you might have missed in this list so far.

From the screenshots, this is perhaps the best-looking TUI library in this list. It also looks fairly advanced already, featuring a rich set of UI widgets like buttons, drop-down lists, gauges, etc. as well as a window manage and theming. However, the lack of documentation (except for the API docs) indicates that this is still a work in progress. 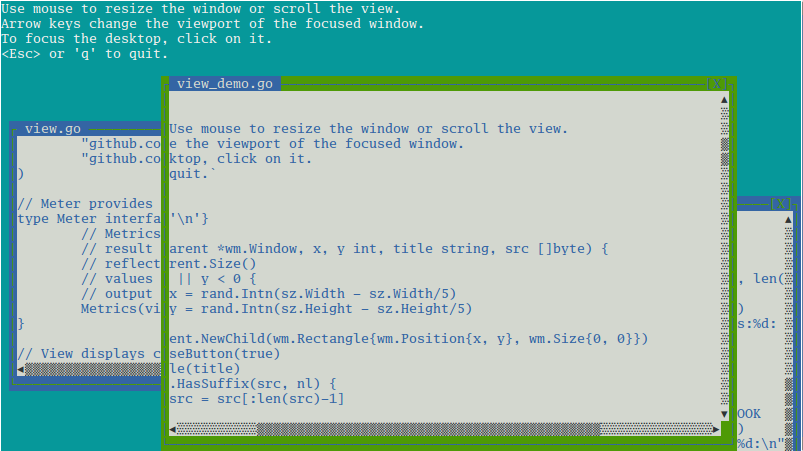 The building blocks of tui-go are widgets and layout boxes. There seems no support for mouse-based resizing of layout boxes, but each layout box can assume one of (currently) two automatic resizing behaviors. 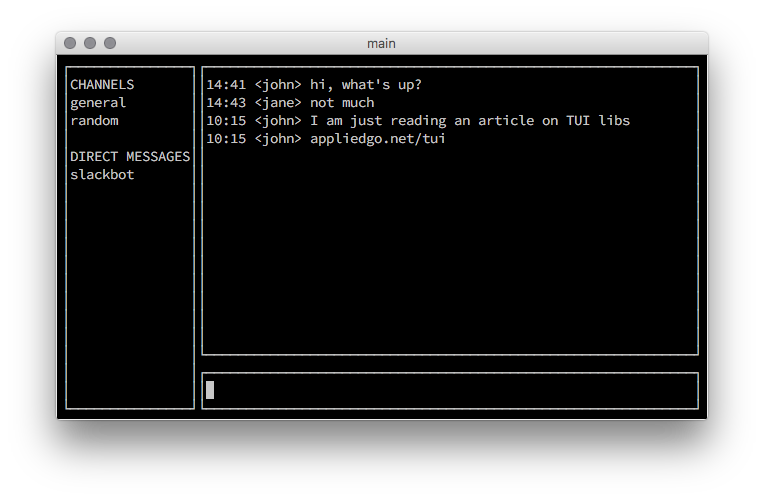 This one is a special kind of TUI. termloop is not a general TUI library. Rather, it is a specialized toolkit for console-based games. So perhaps you won’t be able to build a “standard” application UI on top of it, but you surely can make your windows make a sound when colliding! 😉 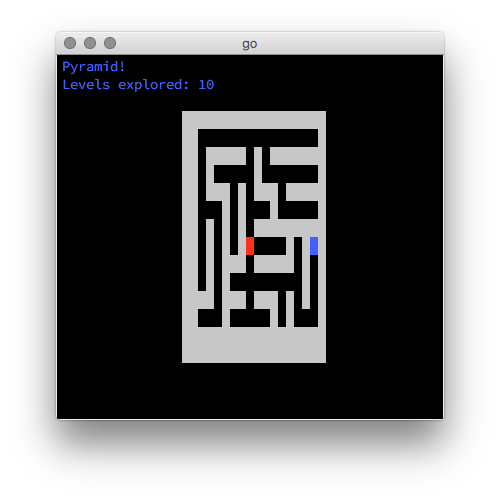 A newcomer in 2018. In order avoid having to always write UI controls from scratch, the author decided to create a package choke-full of high-level interactive controls like:

tview is based on gdamore/tcell.

As always, there is some code included to try out at your end. This time, the code uses the two libraries termui and gocui for creating a minimal UI with a simple layout – similar to the layout in the tui-go screenshot:

If the library provides a text entry widget, text entered there shall appear in the output pane.

Under normal circumstances, importing two UI libraries at the
same time is probably not a good idea, as each has its own event
loop. This demo code takes care of using only one of these
libraries at a time.

Both TUI packages are abbreviated to avoid making the code
overly verbose.

termui organizes its content as “blocks”. Blocks can be positioned using absolute coordinates, or they can be integrated into a 12-column grid layout. The grid layout allows to dynamically adjust the content’s width when the user resizes the terminal window.

Right now, there is no automatic height adjustment available, but an issue has been raised to request this feature.

The test code works around this restriction by manually re-calculating the heights of the list block and the output block before re-aligning and re-rendering the UI.

termui needs some cleanup when terminating.

Get the height of the terminal.

The input block. termui has no edit box yet, but at the time of
this writing, there is an open pull request for adding
a text input widget.

Now we need to create the layout. The blocks have gotten a size
but no position. A grid layout puts everything into place.
t.Body is a pre-defined grid. We add one row that contains
two columns.

The grid uses a 12-column system, so we have to give a “span”
parameter to each column that specifies how many grid column
each column occupies.

When the window resizes, the grid must adopt to the new size.
We use a hander func for this.

Update the heights of list box and output box.

We need a way out. Ctrl-C shall stop the event loop.

That wasn’t too difficult, was it? Text entry is missing here, as termui
has no input controls yet. Still, implementing an input box is possible with
the available API methods; see the _example subdirectory in termui’s repository. It is just too much code for this blog article, so I leave this as an exercise to the reader.

Set up the widgets and run the event loop.

Activate the cursor for the current view.

Here we set the layout manager to a function named layout
that is defined further down.

Bind the quit handler function (also defined further down) to Ctrl-C,
so that we can leave the application at any time.

The terminal’s width and height are needed for layout calculations.

ErrUnknownView is not a real error condition.
It just says that the view did not exist before and needs initialization.

Then the output view.

Let the view scroll if the output exceeds the visible area.

And finally the input view.

The input view shall be editable.

Make the enter key copy the input to the output.

We want to read the view’s buffer from the beginning.

Get the output view via its name.

Thanks to views being an io.Writer, we can simply Fprint to a view.

Put the cursor back to the start.

Again, we can simply Fprint to a view.

Set the focus to the input view.

The layout handler calculates all sizes depending
on the current terminal size.

Get the current terminal size.

Update the views according to the new terminal size.

quit is a handler that gets bound to Ctrl-C.
It signals the main loop to exit.

Our main func just needs to read the name from the TUI lib from the command line
and execute the respective code.

Conclusions from the code

Both libraries have their pros and cons. The termui code seems more concise, but this might be due to the lack of an editing feature (that would have added some lines of code), and perhaps also due to the grid layout engine that made the resize handler a two-liner.

The gocui layout is certainly more flexible but the tradeoff is increased code size. Text input only needs a few lines of code in gocui, whereas data visualization is where termui shines.

I leave the decision to you; maybe you even prefer to go low-level with termbox or tcell, or you might decide to give the other TUI libs a try.

Step 1: go get the code. Note the -d flag that prevents auto-installing
the binary into $GOPATH/bin.

Step 3. Run the binary with either “termui” or “gocui” as a parameter.

A DIY Dashboard with Grafana

Perceptrons – the most basic form of a neural network