Get into the flow

In Flow-Based Programming, programs are modeled as data flowing between independent processing units. Who would not think of channels and goroutines as a natural analogy?

First, the data flow model is inherently concurrent. Data streams are independent of each other, and so are the nodes. Looks like optimal separation of concerns.

Do we have a natural match here? It seems tempting to build an FBP model directly on Go’s built-in concurrency concepts.

In fact, this has been done already.

A quick search on GitHub reveals a handful of Go-based FBP projects, which I list here together with their own descriptions.

“This is quite a minimalistic implementation of Flow-based programming and several other concurrent models in Go programming language that aims at designing applications as graphs of components which react to data that flows through the graph.”

“SciPipe is an experimental library for writing scientific Workflows in vanilla Go(lang). The architecture of SciPipe is based on an flow-based programming like pattern in pure Go (…)

“A LabVIEW and TensorFlow Inspired Graph-Based Programming Environment for AI handled within the Go Programming Language.”

(The last one actually relies on input from a graphical FBP editor (DrawFBP) that it turns into code stubs.)

I also most certainly left out a few FBP libs that I failed to find in the short time of researching this topic, so feel free to do some more research on your own.

For today’s code, I picked the first of the libraries above, trustmaster/goflow. It provides a quite readable syntax and comes with detailed documentation. (On the flipside, goflow uses quite some reflection inside, which some of you might frown upon.)

Our sample code is an incarnation of the schematic FBP graph in the initial animation. Let’s turn the abstract nodes and data items into someting more tangible. For example, we could feed the network with sentences and let one node count the words in each sentence and the other all letters. The final node then prints the results.

First, we define the nodes. Each node is a struct with an embedded flow.Component and input and output channels (at least one of each kind, except for a sink node that only has input channels).

Nodes can act on input by functions that are named after the input channels. For example, if an input channel is named “Strings”, the function that triggers on new input is called “OnStrings” by convention.

We define these nodes:

None of these nodes knows about any of the other nodes, and does not need to.

Our two counter nodes (see below) send their results asynchronously to the printer node. To distinguish between the outputs of the two counters, we attach a tag to each count. (Yes, sending just a string including the count would be easier but also more boring. The splitter already sends strings, so let’s try something different here.)

The splitter receives strings and copies each one to its two output ports.

OnIn dispatches the input string to the two output ports.

WordCounter is a goflow component that counts the words in a string.

The input port receives strings that (should) contain words.

The output port sends the word count as integers.

OnSentence triggers on new input from the Sentence port.
It counts the number of words in the sentence.

letterCounter is a goflow component that counts the letters in a string.

The output port sends the letter count as integers.

To identify letters, we use a simple regular expression.

OnSentence triggers on new input from the Sentence port.
It counts the number of words in the sentence.

An Init method allows to initialize a component. Here we use it to run
the expensive MustCompile method once, rather than every time OnSentence is called.

A printer is a “sink” with no output channel. It prints the input
to the console.

CounterNet represents the complete network of nodes and data pipelines.

With the nodes in place, we can go foward and create the complete network, adding and connecting all the nodes.

Add nodes to the net. (I derived from the documentation by using &{}
instead of new.) Each node gets a name assigned that is used later
when connecting the nodes.

Our net has 1 input port mapped to splitter.In.

Finally, we only need to activate the network, create an input port, and start feeding it with selected bits of wisdom.

We create a channel as the input port of the network.

Now we can send some text and see what happens. This is as easy as sending
text to the input channel. (All aphorisms by Oscar Wilde.)

Closing the input channel shuts the network down.

Wait until the network has shut down.

Step 1: go get the code. Note the -d flag that prevents auto-installing the binary into $GOPATH/bin.

The unordered output shows that the nodes are indeed running asynchronously. Homework assignment: Add more info to the count struct to allow the printer node grouping the output by input sentence.

Still, although we were able to nicely describe our nodes and the connections between them, the resulting code is far from representing an intuitive view on the flow of data within the program. This should not be surprising. A textual representation rarely matches up with the intuitiveness of a graphic representation.

So where is the visual flow diagram editor, you ask?

There are indeed some options.

Just recently, an experimental visual Go environment has been presented to the public – Shenzhen Go. (Careful though – “experimental” means exactly this.) 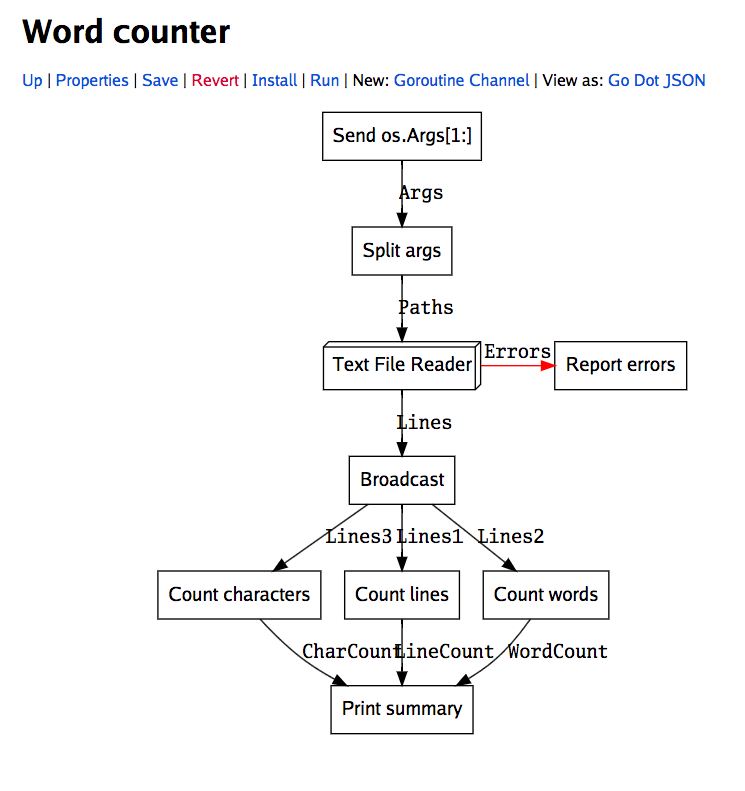 Some nodes contain configurable standard actions, others contain Go code that reads from input channels and writes to output channels (unless the node is a sink). 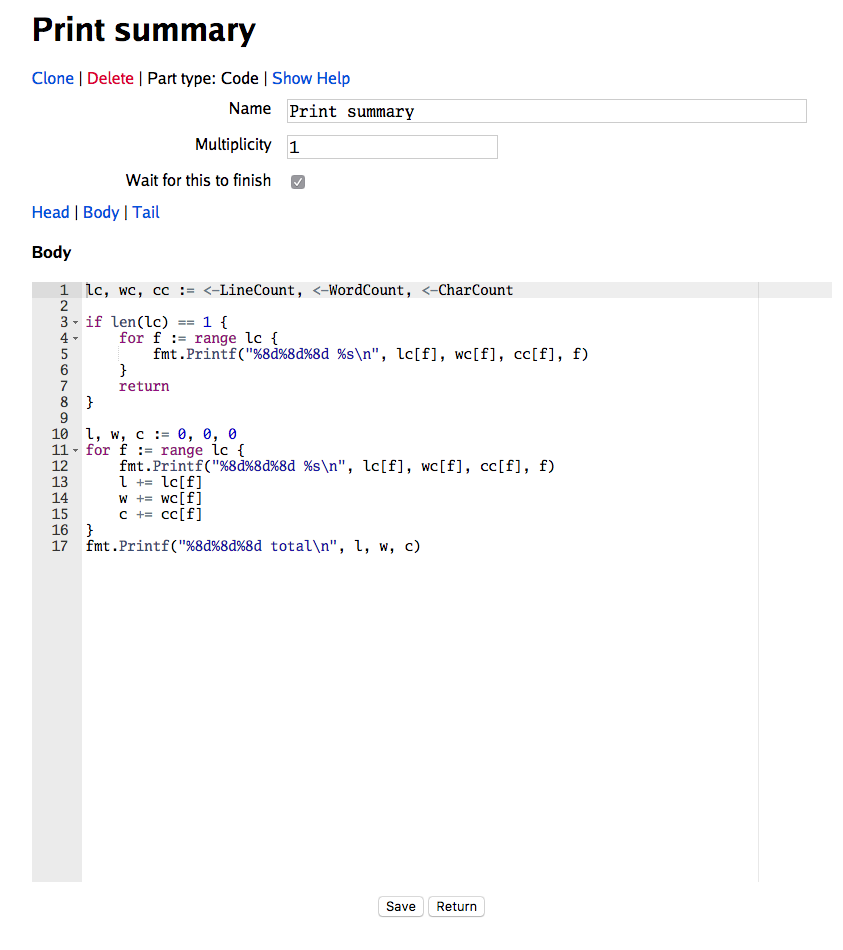 If you want a graphic editor now and don’t want to wait until Shenzhen Go is production ready, have a look at themalkolm/go-fbp. This project generates Go code from the output of a graphical FBP editor called DrawFBP (a Java app). (Disclaimer: I have tested neither go-fbp nor DrawFBP.)

How to Create PDF Documents